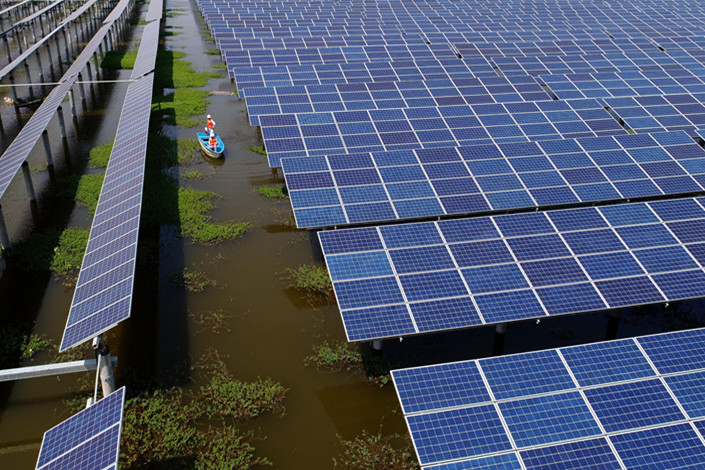 *Deal would reduce GCL-Poly’s current stake in GNE from 62.28% to 11%, and make China Huaneng the majority shareholder

(Beijing) — China’s biggest solar power firm may soon have a white knight from the state sector to rescue it from the consequences of a debt-fueled expansion binge that left it mired in financing issues.

A subsidiary of China Huaneng Group Co. Ltd. has signed a “cooperation intent agreement” to buy a 51% stake in GCL New Energy Holdings Ltd. (GNE), according to a filing posted by its parent, GCL-Poly Energy Holdings Ltd., on the Hong Kong Stock Exchange on Tuesday.

The deal would reduce GCL-Poly’s current stake in GNE from 62.28% to 11%, and make China Huaneng the majority shareholder. The transaction price has not yet been announced as the deal is still in the preliminary stages, according to the filing. GCL-Poly is also a leading manufacturer of solar panel materials.

The majority takeover would be another dramatic move for GNE, which more than doubled its installed capacity to 7.3 gigawatts (GW) between its listing in Hong Kong at the end of 2014 and the beginning of 2018. It accumulated major debts in the process, with its liability-to-asset ratio standing at 84% the end of last year, according to its 2018 annual report. While its shareholders still could split a profit of 467,000 yuan ($67,500) last year, its financing costs ballooned by almost two-thirds from the previous year to 2.3 billion yuan.

Analysts say debt became a major burden for both GNE and its parent, particularly after the government unexpectedly announced the end of subsidy support for solar power generators in May 2018, in what became known as the ‘531’ policy. The company was also harmed by delays in solar subsidy payments from the government due to a widespread backlog, with GNE only receiving 1.47 billion yuan ($210 million) in 2018, 60% less than a year earlier.

“The spinoff is actually very good for [parent] GCL Poly as it will no longer be so tied to paying off its subsidiary’s debts,” said Alex Liu, an equity research director focusing on renewables at UBS. “We estimate that it could drop several percentage points in its leverage ratio, reduce its own financial expenses, and after the deal is completed, use some of the money generated to pay back its own debts,” he added.

The deal also appears to be a good move for Huaneng as the company looks to increase its renewables capacity, which constituted almost 40% of its total 176 GW as of the end of December 2018. The company’s chairman Shu Yinbiao told Caixin earlier this year that the company is looking to grow its renewables capacity as it becomes more difficult to get approval for conventional coal-fired power plants.