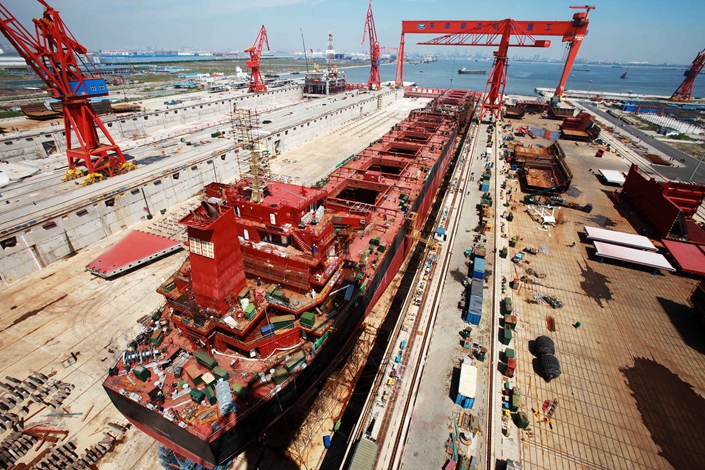 A China Shipbuilding Industry Corp. shipbuilding and repair base in the northern Chinese port city of Tianjin. Photo: VCG

China’s two largest ship manufacturers could soon get back together to form the world’s largest shipbuilder.

China State Shipbuilding Corp. (CSSC) and China Shipbuilding Industry Corp. (CSIC) are in talks over a strategic merger, according to several stock filings made by the two companies’ listed units on Monday.

The public filings imply that the merger has nearly been agreed upon, though sources close to the matter told Caixin that detailed plans have not been reached yet.

Since 2015, Beijing has embarked on an effort to consolidate the country’s bloated state-owned sector to pare down leverage and increase their global competiveness. Most of China’s major state-owned enterprises were carved out from former monopolies that executed Beijing’s directives when the country’s economy was subject to a greater degree of central planning than today.

A number of major mergers have since taken place, including the 2017 deal between Shenhua Group Corp. and China Guodian Group Corp., which created the world’s largest power utility, as well as the union of chemical giants China National Chemical Corp. and Sinochem Group in 2018.

In the latest case, CSIC and CSSC were one conglomerate until 1999 when they were split into two. With China’s Yangtze River as a rough border, CSSC and CSIC operate businesses in the country’s south and north, respectively. The two companies’ combined assets are worth over 500 billion yuan ($73 billion).

The companies must seek regulatory approval before a merger is implemented, according to the Monday filings.

The two companies have been planning a merger for years, sources said. At a 2015 conference between former executives from the pre-merger entity and CSIC executives, some of the former executives proposed a merger, complaining that the 1999 separation had put a ceiling on growth, according to the sources. Later, the shipbuilders started to frequently cross-appoint executives and manage assets together — a pattern which can indicate an impending merger.

The merged company, which would operate both civil and military businesses, could become the world’s biggest shipbuilder in terms of capacity, multiple industry insiders told Caixin.

Currently, the sector’s leading nation is South Korea, where Hyundai Heavy Industries inked a deal in March to acquire Daewoo Shipbuilding & Marine Engineering. The move is expected to create a global naval and commercial shipbuilding giant with 20% of global market share, according to South Korea’s Yonhap News Agency.