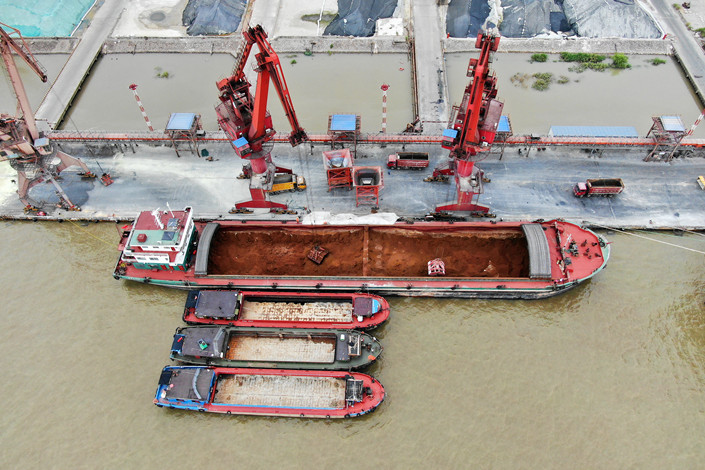 Iron ore futures in China reached a four-year high on Wednesday, extending a rally that has seen them nearly double since late last year, driven up by global shortages and rebounding demand from Chinese steelmakers.

The Dalian-traded contract for iron ore due for delivery in September rose 2.5% to close at 909 yuan ($132) per ton, marking the first close above the 900 yuan threshold since early 2014. The Wednesday gains followed an even stronger 5.2% rally the previous day, amid growing demand and ongoing global supply shortages.

The latest rally stems from rebounding steel prices in China, which are boosting steelmakers’ profits, S&P analyst Wang Yangwen told Caixin. Solid demand for the material is prompting those manufacturers to increase output to take advantage of positive market conditions.

China is the world’s largest steelmaker, following years of breakneck economic growth that created huge demand for the material. But demand has slowed in recent years as the country’s economy has cooled, helping to fuel a prolonged global downturn for the price of iron ore, one of the main components used in steelmaking.

In addition, China has embarked on a campaign for the last several years to consolidate its steelmaking sector by combining companies and eliminating less efficient capacity. One of the latest deals would see state-owned China Baowu Iron and Steel Group, the nation’s largest producer, buy 51% of the smaller Magang Group Holding Co. Ltd.

As the consolidation winds down, output has begun to stabilize, which in turn is helping to stabilize demand and drive up prices.

At the same time, other factors outside China have constricted the supply of iron ore, putting further upward pressure on prices. One of the largest of those occurred in January, when a dam associated with the mining operations of global iron ore giant Vale burst in its home Brazilian market. The company was ordered to halt operations at two mines the month after the accident, constricting global supplies.

China produces over half of the world’s steel, with national production rising 8.1% year-on-year to a record 928 million tons in 2018, according to government statistics.