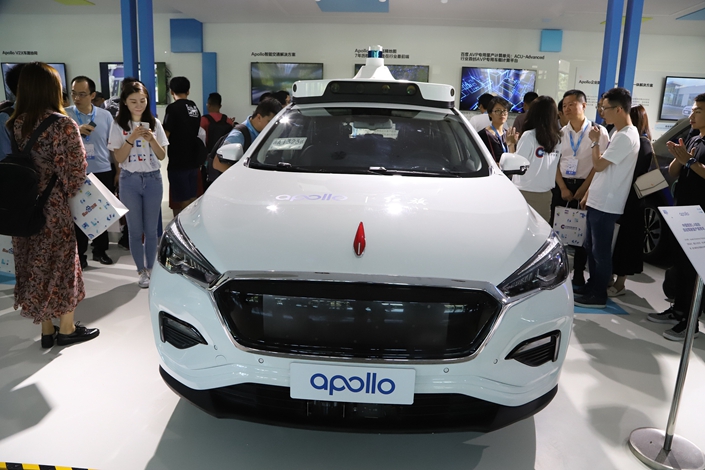 Despite announcing a flood of new initiatives in a bid to transform itself into an artificial intelligence (AI) specialist, Chinese search engine Baidu has failed to energize skeptical investors at its annual developer’s conference in Beijing this week.

Baidu laid out a series of achievements in artificial intelligence — with a specific focus on autonomous driving — at the Create AI conference on Wednesday. The company’s autonomous cars have driven more than two million kilometers (1.2 million miles) across 13 cities in China, said Li Zhenyu, an executive in charge of the business segment.

The company also announced a series of high-profile partnerships, including with chipmaker Intel Corp., telecommunications giant Huawei Technologies Co. Ltd., and automaker Geely Automobile Holdings Ltd. Baidu said its tie-up with Geely brought its total number of auto partners to more than 60, all of whom will use Baidu’s voice recognition software.

But the response from U.S. investors has been tepid, with shares in the tech giant declining 0.66% to close at $118.56 on in New York on Wednesday. That was slightly higher than the closing price of $110 on May 1, when the company’s stock hit its lowest mark in five years.

“Markets are taking a ‘wait & see’ approach with Baidu, as company explanations are being met with skepticism,” said Brock Silvers, managing director of Kaiyuan Capital, a multi-asset advisory and investment firm focused on China.

“Despite the company’s outward optimism and reassurances, many investors suspect that Baidu is now a troubled company in need of reinvention,” he said.

A formidable force in the personal computer era when its search engine was a popular gateway to the internet, Baidu’s dominance has faded as a host of mobile apps have bitten into the company’s bread-and-butter online ad business.

The company has been dogged by scandal since 2016, when a college student named Wei Zexi died after the company’s search engine led him to a costly and bogus experimental cancer treatment.

Earlier last month, the company said it had wiped more than 1 billion advertisements from its platforms this year, as regulators ratcheted up pressure on internet companies to eliminate inappropriate content.

And early this year, the company took flak when a former journalist published a provocative blog post titled “Baidu as a Search Engine Is Dead,” which accused the company’s search product of focusing on content hosted on Baidu pages. The post went viral.