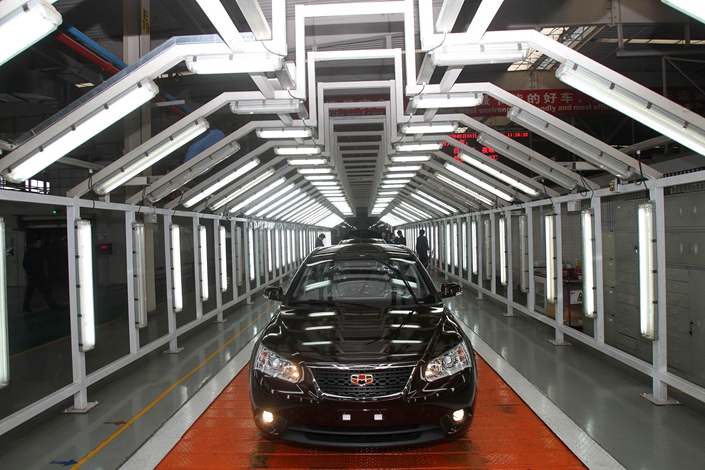 Geely Automobile Holdings Ltd., one of China’s top domestic car brands, revised down its 2019 sales target and warned of a large profit decline in the first half, as the nation’s broader auto market slows sharply after years of breakneck growth.

The carmaker’s Hong Kong-listed shares fell about 4% on Tuesday, and now trade near a two-year low. The company said it expects its profit for the first half of this year will fall about 40% from the 6.67 billion yuan ($969 million) profit it posted in the same period a year earlier, according to a stock exchange announcement posted late on Monday.

“The directors believe that the decrease … is primarily due to the greater-than-expected decrease in overall sales volume in the Chinese vehicle market and the group’s proactive reduction in aggregate inventories of its dealers, resulting in negative impact on the group’s sales volume and profit margin during the same period,” Geely said. “The board considers that the overall operations of the group remain sound and intact. The group’s overall financial position also remains healthy.”

Geely also lowered its 2019 sales forecast by 10% to 1.36 million cars from previous target of 1.51 million. While the earlier target represented a slight gain from its 2018 sales of 1.5 million vehicles, the new figure would put the year-on-year change squarely in the negative column, representing a decline of 9.3%. Geely previously reported its vehicle sales in the first half of the year fell 15% to 651,700, equal to 43% of its previous full-year goal.

China passed the U.S. to become the world’s largest auto market nearly a decade ago, as car ownership became increasingly popular among the nation’s emerging middle class. But after years of strong growth, the industry began to contract in the middle of last year in step with China’s slowing economy. Compounding the problem, many car dealers have been ordering fewer vehicles recently and working to clear out inventory as China rolls out new, tougher emissions standards. Recent reductions in government incentives for new-energy car purchases have also had a dampening effect on that part of the market.

As the inventory clear-out gains momentum, a gauge maintained by the China Automobile Dealers Association has shown marked improvement. The group’s inventory early warning index stood at 50.4% in June, the lowest level in 18 months, representing an 8.8 percentage point reduction from a year earlier. Readings above 50% are above a threshold considered critical.

Geely’s profit warning came as the China Passenger Car Association reported that retail sales of sedans, sport utility vehicles, minivans and multipurpose vehicles rose 4.9% to 1.8 million units in June from a year earlier, based on preliminary data. That represented the first increase since May 2018 for the world’s biggest market.

But analysts pointed out that the figure, while encouraging, could also be inflated by heavy discounting as part of the larger inventory clearing exercise. A recent report from China Merchants Securities found that discounting was common in the first four months of the year, with such discounts averaging 12.9%.