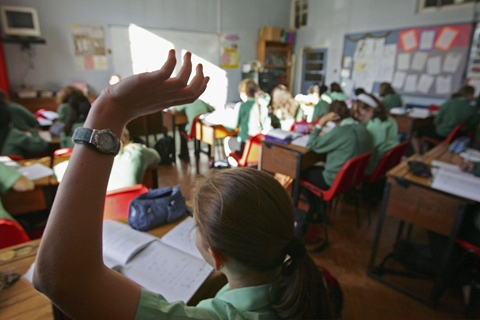 Students at a private school in the U.K. Photo: VCG

CATS operates private high schools mainly catering to international students. It has seven campuses globally, including one in Shanghai. Its net revenue was approximately 89 million pounds in 2018.

Bright Scholar, which operates K-12 international and bilingual schools under the “Country Garden” brand in China, is backed by Chinese property tycoon Yeung Kwok-keung’s family. Yeung is the founder and chairman of Country Garden Holdings, one of China’s largest residential property developers.

Country Garden has built its success on offering luxury residences outside major urban centers. Yeung has said the developer entered the education sector to better serve its clients, mostly affluent business owners who are worried that their family wealth may last no more than three generations.

Since establishing its first Country Garden School in Shunde city of Guangdong province, Bright Scholar has expanded its network to 62 schools throughout China, including kindergartens, elementary schools and secondary learning institutions, with more than 42,000 students. Most of the schools are close to Country Garden’s residential developments.

Jerry He, executive vice chairman of Bright Scholar, said the acquisition of CATS will expand Bright Scholar's significant presence outside China as it builds “a global network of premium schools.”

This is the third acquisition Bright Scholar has made in the past year. Last October, it acquired Bournemouth Collegiate School, a day and boarding school in the U.K. Last month, Bright Scholar announced the expansion of its overseas school portfolio with the acquisition of St. Michael’s School and Bosworth Independent College in the U.K. for 38 million pounds

Country Garden is not the only Chinese property developer buying U.K. educators. In 2017, an investment group backed by Wanda Group acquired Ipswich High School for Girls and Abbotsholme School. Zhejiang-based developer Zhong An Group announced in May that it acquired a 32% stake in Maggie & Rose, the famous London's luxury private members club for kids and parents.

According to data from the U.K.’s Independent Schools Association, there were 1,364 private schools in the U.K. with 536,100 students in 2018, of whom about 10% were international students. Of the foreign students, about a fifth were from mainland China. Since 2015, Chinese mainland students have been the largest source of overseas students in the U.K.