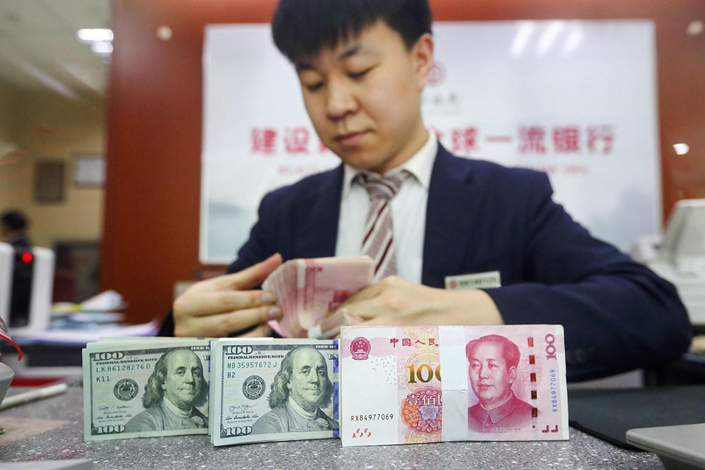 The onshore yuan depreciated beyond 7 per dollar soon after trading began Monday, something it has not done since April 2008. Photo: VCG

The Chinese yuan on Monday tumbled beyond 7 per dollar, its weakest level in over a decade, as the trade relationship between Beijing and Washington cools yet again.

The yuan — both offshore and onshore — broke through the key psychological barrier of 7 per dollar in morning trade on Monday, after China’s central bank set the currency’s daily reference rate at 6.9225 per dollar, the weakest since December. The onshore yuan depreciated beyond 7 per dollar soon after trading began at 9:30 a.m., something it has not done since April 2008.

The offshore yuan remained beyond 7 per dollar in the afternoon of Asian trading hours, as did the onshore yuan by closing.

Analysts linked the depreciation to the recent intensification of trade frictions. U.S. President Donald Trump threatened on Thursday to impose an additional 10% tariff on an additional $300 billion of Chinese goods, beginning Sept. 1. Beijing also pledged to fight back if Washington goes ahead with the plan.

The People’s Bank of China (PBOC) said in a statement (link in Chinese) on Monday that the depreciation was affected by unilateralism, trade protection measures and the U.S. potentially imposing increased tariffs on Chinese goods.

PBOC Governor Yi Gang said in a statement (link in Chinese) on Monday evening that the current exchange rate is at an appropriate level. “Although the yuan exchange rate has fluctuated due to recent external uncertainties, I am confident that the yuan will continue to be a strong currency,” said Yi. China adheres to the market-determined exchange rate system, and would not use the exchange rate as a tool to deal with external disturbances such as trade disputes, he said.

Today’s move underscores that global markets and policymakers will have to get used to a more market-driven yuan and the greater variability that comes along with that, said Louis Kuijs, an economist at Oxford Economics, in a note on Monday.

Top Chinese finance officials have previously attempted to downplay the significance of such a fall. Yi told Bloomberg in June that no specific level for the yuan is important.

And Zhou Xiaochuan, China’s former central bank chief, also said in May that “if you see it (7-yuan-per-dollar) as a (psychological) ‘bottom line,’ that may be a bit of an overreaction.”

Zhou also said that China insists that the mechanism for setting its exchange rate is based on supply and demand, and doesn’t need to alter the principles of the mechanism just because of market fluctuations.

“It will be harder for the government to defend the currency given the additional tariffs which could weigh on exports and add depreciation pressure to the currency,” Goldman Sachs analysts said in a Sunday note.

The U.S. dollar’s recent resurgence left the yuan needing to weaken against the dollar in order to maintain stability against its currency basket, said Tai Hui, Asia Pacific chief market strategist at J.P. Morgan Asset Management, in a note on Monday. “This can be interpreted as a strong signal from Beijing to pressure Washington on trade negotiation,” he said.

Capital Economics analysts were of a similar opinion. “(Beijing) appears to have decided that, given the increasingly dim prospects of a trade deal with the U.S., the boost to China’s export sector from currency depreciation is worth attracting the ire of the Trump administration,” they said in a Monday note.