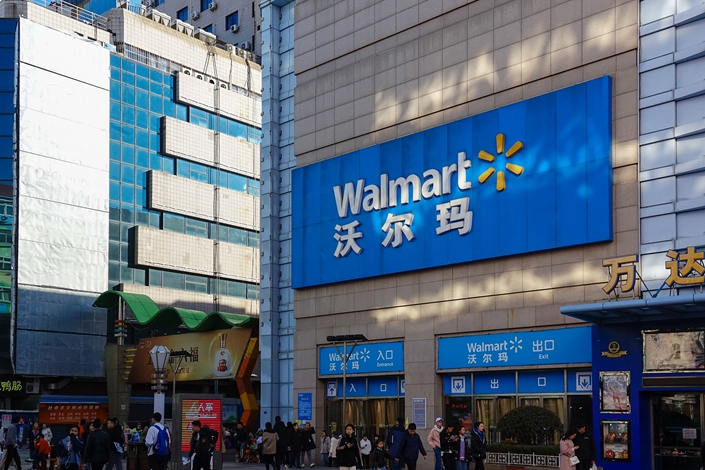 Walmart’s sales gains in China come amid a broader retreat from the market by other major global retailers in the face of stiff competition from e-commerce. Responding to that challenge, Walmart has formed strategic alliances with China’s No. 2 e-commerce company JD.com Inc., as well as social networking giant Tencent Holdings Ltd.

Walmart’s China sales growth was far better than the figure for its broader international operations, whose overall sales fell 1.1% to $29.14 billion for its fiscal quarter through July 26. The company’s same-store China sales rose 3%, with same-store sales for its Sam’s Club chain up by double digits percentages, mainly driven by fresh food and dried food. Transaction volume at its China stores rose 0.7%, while average transaction value was up 2.3%.

Walmart’s positive momentum comes as the company is one of the last major Western retailers to remain committed to the massive but highly competitive China retail market. In June, French giant Carrefour said it was selling 80% of its China operation to local retailer Suning for 4.8 billion yuan ($682 million). And in March German giant Metro said it would sell its China operations for $1.5 billion to $2 billion, with Tencent, Alibaba, Suning, Yonghui, Wumart and Walmart itself being named as possible buyers in various media reports since then.

One of the few exceptions has been U.S. bulk discount chain Costco Wholesale Corp., which is set to open its first brick-and-mortar China store at the end of this month.

Going against that bigger exiting tide, Walmart said last month it will invest $1.2 billion in China over the next 10 years, much of that to upgrade its logistics capabilities. In discussion of the company’s latest results, CEO Doug McMillon also pointed out that Walmart is expanding its delivery service based on Tencent’s wildly popular WeChat app, which allows customers to receive their orders within 45 minutes of placing them.

But Walmart has also undergone its own retrenchment by shutting down some underperforming stores and revamping and expanding its Sam’s Club outlets. The company currently has 26 Sam’s Clubs in China with more than 2 million members, and aims to boost that to more than 40 stores by the end of 2020. But Walmart also closed more than 20 stores in 2017 and 2018, and shuttered another 15 locations this year through June, according to a research report from China Merchants Securities.