By Tang Ziyi and Zheng Lichun 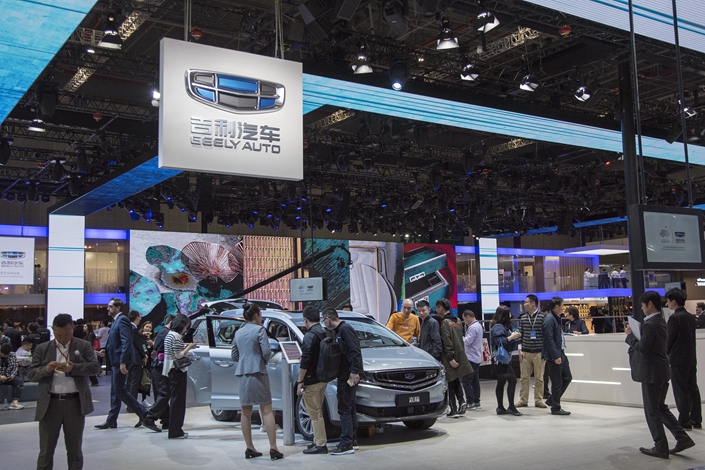 Geely showcases one of its models at an auto show in Shanghai on April 16. Photo: VCG

One’s a traditional automaker. The other makes new-energy vehicles (NEVs). But industry giants Geely and BYD both posted bearish outlooks in their half-yearly earnings reports this week.

They’re bracing for a sustained decline in the world’s largest car market.

Geely, which is China’s biggest private carmaker, said in its interim report that it faced an uncertain demand outlook for the second half. Last month, it lowered its full-year sales forecast by 10% to 1.36 million units

BYD Co. Ltd., the country’s largest maker of new-energy vehicles, performed better with first-half net profits of 1.46 billion yuan, up from 479.1 million the year before. The company’s bread-and-butter NEV business moved 145,653 units in the first six months, up 94.5% from a year ago, it said in a statement last month.

Nevertheless BYD predicted profit growth would slow to somewhere between 1.8% and 14.9% in the first three quarters of the year, due to declining general auto demand, as well as the loss of industry subsidies, the carmaker said in an interim report released Wednesday.

After a dream run for almost three decades China’s auto market has hit the skids at the same time the government is attempting to tighten emissions controls and cut excess industrial capacity. Sluggish sales have put increasing pressure on automakers.

The Chinese government is also phasing out NEV subsidies in an attempt to make the industry more self-sufficient after years of subsidy abuse. Sales of NEVs — a category that includes pure electric and hybrid electric cars — fell 4.7% in July, the first decline since January 2017.

The NEV market is expected to contract for the rest of this year, analysts said. Last month, BYD sold 16,567 NEVs, down 11.8% year-on-year, it said in a statement last month.