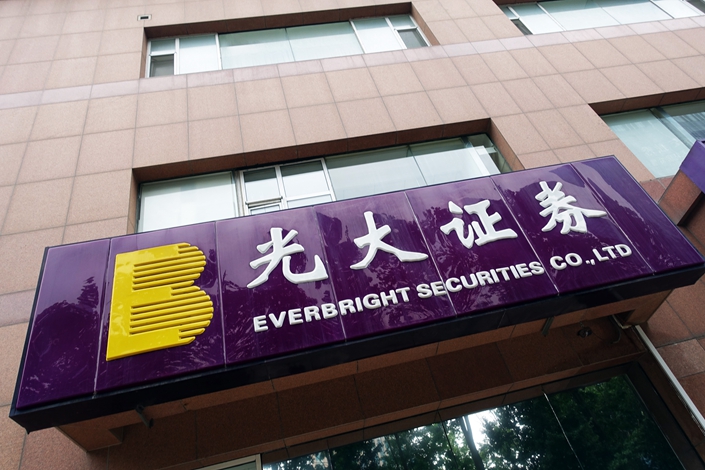 A failed British sports media deal is still weighing on Everbright Securities Co. Ltd. although the state-owned brokerage’s profits bounced back in the first half of 2019.

On Tuesday, Everbright reported another 300 million yuan ($41.9 million) of provisions for estimated liabilities in the first half year due to its involvement, via a subsidiary, in a consortium that in 2016 purchased a 65% stake in defunct London-based MP & Silva Holding (MPS) for 5.2 billion yuan. Everbright booked a 1.52 billion yuan in provisions for contingent liabilities and impairment losses related to the deal in 2018.

Like so many other overseas deals in recent years, when Chinese companies embarked on a global credit-driven spending spree, the purchase of MPS soon became an albatross around the neck of its buyers. After the handover, MPS lost key contracts — including the broadcast rights to top flights of Italian and French soccer — and its main dealmakers left for rival companies. In October 2018, MPS was declared bankrupt and liquidated.

While Everbright only made a minority investment of 60 million yuan in the deal, dodgy deal-making led to it owing over 3 billion yuan to two senior-tranche partners in the consortium, according to its 2018 statement. The company faces several legal battles as the two senior partners, China Merchants Bank Co. Ltd. and Shanghai Huarui Bank Co. Ltd., try to recoup their losses.

The good news for the brokerage is that its profit has rebounded on stronger investment yields. Its latest financial report showed that Everbright had net profit of 1.6 billion yuan in the first half of 2019, up 66.1% year-on-year, while its net profit for the whole of 2018 was down 96.6%.

The company said in the report that it has “implemented strict accountabilities” targeted at the people responsible for the MPS mess and will continue to do so. Several senior managers have resigned, including then-chairman Xue Feng and former chief risk officer Wang Yong. Xiang Tong, who at the time of the deal was investment director at the Everbright subsidiary and the manager of the takeover project, was arrested earlier this year on suspicion of accepting bribes.

While its former investment partners are looking for cash from Everbright, it is in turn looking for compensation from another player in the deal, Baofeng Group Co. Ltd.

Baofeng — which teamed up with Everbright to form the investment vehicle that raised the cash for the deal and made the stake purchase — had promised to purchase the MPS shares from the other investors in the consortium within 18 months of the closure of the takeover deal. It never followed through with this pledge.

Baofeng’s founder and president, Feng Xin, has been detained on suspicion of “giving bribes to nonstate functionaries.” Sources told Caixin that the investigation into Feng may be linked to the MPS case.