By Isabelle Li and Qian Tong 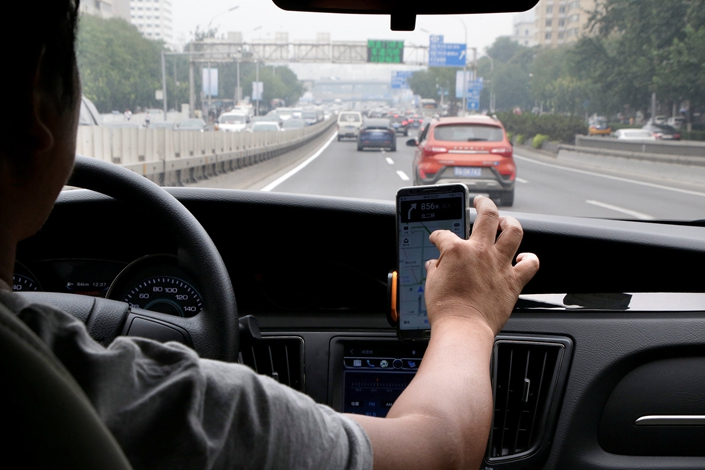 A Didi Chuxing driver in Beijing on Aug. 28. Photo: VCG

There is a chance that China’s dominant ride-hailing company Didi Chuxing could be removed from app stores if it doesn’t clean up its act. Or so the Shanghai government has threatened.

The Shanghai Municipal Transportation Commission made the threat after again fining Didi for a violation of ride-hailing regulations, according to a statement published Wednesday on social media.

Since July, the commission has cited Didi’s Shanghai operation for at least 100 violations, amounting to 10 million yuan ($1.44 million) in fines, according to the statement. The commission announced the latest citation on Wednesday night after local officials caught a Didi driver in an “unqualified” vehicle on Tuesday.

The regulator went on to accuse Didi of not doing enough to make sure its vehicles and drivers meet local safety regulations, the statement said. It also accused Didi of trying to game the system and sidestep regulations.

For example, the commission alleged that many Didi drivers dodge Shanghai’s ride-hailing regulations by registering on the platform in other cities where the rules aren’t as strict and returning to drive in Shanghai.

The vehicles and drivers pose a threat to the safety of passengers in Shanghai as they can avoid the background checks and vehicle verification required by the city, the commission said.

The regulator said it met with company employees in the city on Monday and ordered them to scour unqualified drivers and vehicles from Didi’s rolls in Shanghai.

The Shanghai regulator began taking a harder look at Didi’s local operations after a June car crash involving an unqualified driver in the city. Local officials ordered the company to remove all unqualified drivers from its platform by the end of the month. However, the violations continued.

In a response to Caixin on Thursday, Didi acknowledged there continued to be violations on its platform and said it was cracking down on violators.

The company said it has now submitted vehicle and driver information required by the city’s regulator, and has promised to conduct a monthly cleansing of illicit accounts.

The Shanghai government warned ride-hailing companies last month that their apps could be removed from app stores if they fail further inspections. It was unclear how the local regulator might make this happen.

The Shanghai transportation commission has met with other agencies to discuss possible punishments, including removing the ride-hailing apps and taking their services offline, according to the Wednesday statement.

In a July inspection, Didi and lifestyle platform Meituan Dianping were fined 5.5 million yuan and 1.47 million yuan respectively for operating vehicles that failed to meet regulations.