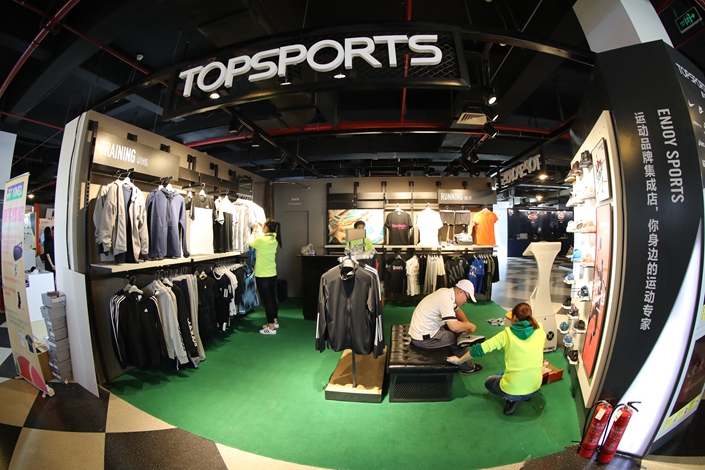 Topsports, which filed for its IPO in June, reported a profit of 2.2 billion yuan in its 2019 fiscal year, which ended in February, up 53% from the previous year. Photo: IC Photo

A sports retailing unit of formerly struggling shoemaker Belle International Holdings Ltd. has been approved for a Hong Kong listing with an aim to raise $1 billion, returning to market two years after the parent company’s privatization.

Belle’s Topsports International Holdings Ltd., a sportswear retailer, wants to use the $1 billion it hopes to raise for research and development of technology for its business and other operating expenses, according to people familiar with the deal, speaking on condition of anonymity because such details of the offering aren’t public.

The plan has been approved by the listing committee of the Hong Kong Stock Exchange, according to a filing to the bourse on Sunday. Merrill Lynch Far East Ltd. and Morgan Stanley Asia Ltd. are joint sponsors of the offering, the filing said.

Topsports said it is the largest sportswear retailer in China, selling brands including Adidas, Nike and Puma. The company, which filed for its IPO in June, is among several major firms testing the waters of Hong Kong’s capital markets after months of protests have disrupted life in the city.

The listing plan comes two years after Topsports’ parent Belle delisted from Hong Kong, as part of a broader overhaul aimed at ensuring its longer-term survival. Belle’s bottom line had been declining at the time due to a global market slowdown in the women’s shoe business. Its traditional retailing business model was also lagging amid a rise in e-commerce.

Despite Belle’s broader difficulties in footwear, the sportswear business is lucrative due to interest in healthy lifestyles, said Tang Xiaotang, an industry analyst at consultancy No Agency.

China’s sales of sports-related products and services reached 405 billion yuan in 2018, up from 277.7 billion yuan in 2014, according to Topsports’ filing, citing data from research company Frost & Sullivan. The market is expected to hit 610 billion yuan by 2023. Seeking more revenue streams in the market, Adidas in March opened its Asia-Pacific regional headquarters in Shanghai, the German sportswear giant’s first such regional headquarters outside of a similar center for North America.

Sales of products of Adidas and Nike — Topsports’ two biggest clients — contributed about 90% of the retailer’s total revenue in the last three years. Topsports holds 15.9% of the Chinese sportswear retailing market, the filing said.