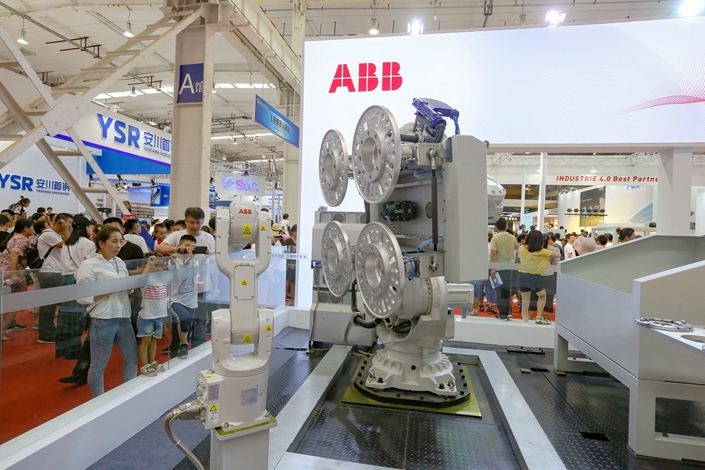 ABB robots on display at the World Robot Conference 2019 in Beijing on Aug. 24. Photo: VCG

Although China’s demand for industrial robots has weakened amid the trade war, a Swiss robotics company has just placed a long-term bet that the country’s factories will eventually need to become a lot more automated.

ABB Ltd. broke ground Thursday on a new robotics facility in Shanghai, the company announced the same day at a ceremony in the city. The $150 million facility, which is slated to start operation in early 2021, will produce industrial robots.

The plant was designed with an annual production capacity of 100,000 robots — for use in industries such as electronics and automobiles, Ulrich Spiesshofer, ABB’s former CEO, told Caixin (link in Chinese) in a previous interview in November last year. That number is equal to about one-quarter of the total global demand it estimated in 2018, he said.

China has been the world’s largest buyer of industrial robots since 2013. The country has been on a robot buying binge in recent years as companies nationwide have ramped up efforts to maintain productivity in the face of rising wages and worker shortages.

China’s industrial robotic market grew fastest from 2013 to 2017, but it shrank last year as growth slowed in industries such as automotive and electronics, where robots have been in heavy use, said a government official from the Ministry of Industry and Information Technology. The market has also faced broader headwinds from the China-U.S. trade war.

Slowing sales have hurt ABB’s earnings. In the second quarter of this year, the company’s robotics and discrete automation orders fell 14% and its sales in this business dropped by 9%, partly due to weakening demand in China, ABB said in its financial statement.

However, ABB struck an upbeat note about the potential of China’s industrial robotics market in the long run. “Despite short-term market challenges, China’s development as a global manufacturing hub, the ongoing trend towards mass customization and a rising shortage in skilled labor will continue to create strong and lasting demand for automation solutions in the region,” Sami Atiya, president of ABB’s Robotics and Discrete Automation division, said in a press release.

ABB said the Shanghai facility will complement its two other sites, one in Sweden, and the other in the U.S.