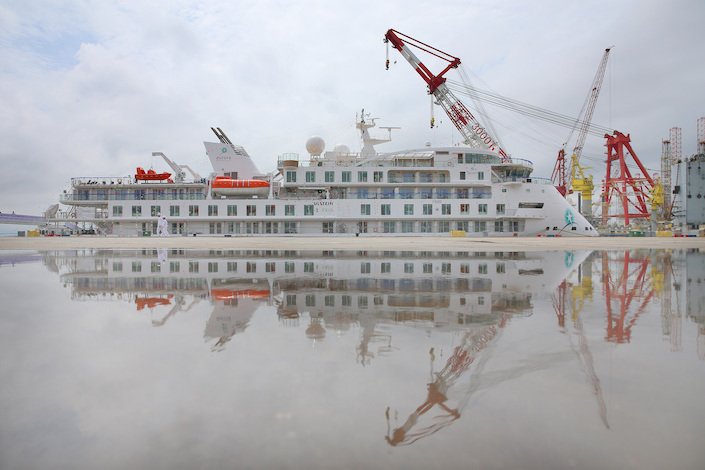 CMIH has embarked on a series of acquisitions since 2017 amid state-backed industry consolidation. Photo: VCG

China’s state-owned conglomerate China Merchants Group plans to invite outside investors for its shipbuilding unit in a bid to better cope with a toughening market environment, Caixin learned from sources.

The CMIH overhaul comes as China has embarked on an effort to consolidate state-owned shipbuilding assets amid a worldwide slowdown in the industry. CMIH is one of China’s largest state-owned shipbuilders and the world’s top marine engineering equipment maker. Its larger domestic rivals, China State Shipbuilding Corp. (CSSC) and China Shipbuilding Industry Corp. (CSIC), are in talks over a strategic merger, which would form the world’s largest shipbuilder.

CMIH’s ownership restructuring is likely to be carried out in phases and would first be tested in some subsidiaries, a source from CMIH said, adding that a plan has yet to be decided.

Hu Chi, a researcher at the State-owned Assets Supervision and Administration Commission, said China Merchants may first invite state-owned investors into CMIH to diversify the unit’s shareholding structure and then open the door to nonstate investors.

The CMIH source said the company has held talks with potential investors including Aluminum Corp. of China Ltd.

In response to a Caixin inquiry, CMIH confirmed the launch of a mixed-ownership restructuring and said plans are still under discussion.

CMIH is among the few subsidiaries of China Merchants that haven’t gone public, partly due to its massive assets. According to a bond issuance document in April, CMIH had 34.6 billion yuan ($4.9 billion) in total assets at the end of 2017. The company posted 7.63 billion yuan of revenue that year with a net loss of 5.3 billion yuan.

Li Jianhong, chairman of China Merchants, said earlier this year that the group would continue pushing forward mixed-ownership reforms among all of its major subsidiaries and encourage them to list shares.

But the CMIH source said the company is not in rush for a public listing given an unfinished internal reshuffle and the poor market environment.

“We will definitely list but not undersell our assets,” said the person, who declined to be identified.

Established in 1997, CMIH is the main equipment manufacturing unit of China Merchants after several rounds of consolidation. According to the company website, CMIH owns nine shipyards with specialties in marine engineering and construction of cruise ships and special purpose vessels.

In January this year, CMIC took over two shipyards from Sinotrans Changhang Group Co. In April and August, it acquired all shipbuilding assets from AVIC International Holdings in two deals.

CMIC’s deals with China International Marine Containers and AVIC International are believed to be part of a state-backed effort to consolidate their shipbuilding and marine engineering businesses under CMIC’s umbrella.

A source from China International Marine Containers said the company is in talks with CMIH to sell its marine engineering unit, CIMC Raffles Offshore Singapore Pte. Ltd. A CMIH source confirmed the discussions.

The series of acquisitions made CMIH China’s second-largest shipbuilder behind the merged CSSC and CSIC. Some analysts warned of risks of CMIH’s aggressive expansion during a market downturn as the high debt and inventory levels of the assets it acquired may drag on future performance.

But Zhou Shu, an analyst at Shanghai Shipping Exchange, said CMIH has to expand its market footprint to counter the competitive threat of the merger of CSSC and CSIC, which will form a behemoth with more than 50% of the market.