In Depth: To Tea or Not to Tea — Investors Try to Make Sense of Milk Tea Craze 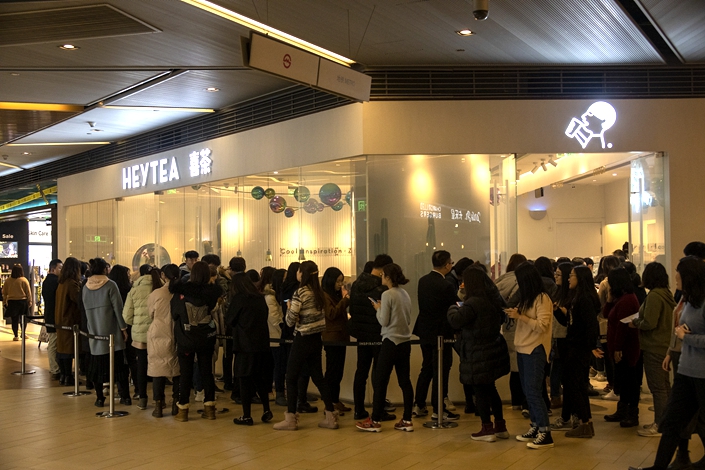 A Heytea branch in a Shanghai shopping mall on Jan. 28. Photo: VCG

Beijing’s trendy Sanlitun district is flooded with milk tea, as over 70 merchants peddling the popular beverage in various forms and flavors lie within a 10-minute walk of the shopping district, often with long lines outside their small stores.

The sweet milky tea — sometimes laced with chewy tapioca pearls, or layers of fresh fruit and cream — has beat coffee to become the most popular drink among China’s hip and young consumers.

But as the much-hyped industry boils with excitement, some experts are warning that milk tea might follow many of its peers in other trendy areas and become the next market bubble.

Unlike foreign drinks like coffee and colas, tea has a long history in China that may be helping to fuel the rise of the new generation of milk teas. The British were some of the first to experiment with adding milk to tea, and more recently Taiwan took that equation a step further by added its own touch with chewy tapioca pearls in the mix.

Now the new generation of Chinese chains is taking those concepts to a new level by giving the product a hipster reputation and premium image. Leading that group is Heytea, the hottest brand whose Sanlitun shop often sees long lines of fashion-conscious shoppers waiting hours just to get a cup of their favorite beverage. That kind of attraction has also made Heytea a favorite of investors.

Founded in 2012, Heytea started off in a 15-sqaure-meter (161 square feet) shop in the mid-sized city of Jiangmen about 100 kilometers from Guangzhou. At its founding it was hardly the upscale product being sold today, counting students at a nearby middle school as its main customers. It was formally known as Royal Tea before its popularity spawned too many copycats, forcing it to change its name.

Today its products typically cost between 20 yuan ($2.83) and 35 yuan per cup, roughly the same as a coffee from Starbucks. The company’s breakout success came when it used an innovative recipe involving a type of cream lining the sides of cups to create an attractive pattern of layered swirls, according to a Jiangmen resident familiar with the shop’s early days.

“It was very innovative at the time,” the resident told Caixin. “Almost every student would love to get one cup of the beverage on their way home from school.”

Innovation has become the industry’s mantra since then, as chains look to create the next fashionable variation of a drink that, in its purest form, is still strongly associated with the older generation. In extreme cases, young customers at some of Heytea’s stores are willing to wait as long as seven hours for the latest flavor craze, such as a cheese-topped tea that has become popular after being endorsed by online celebrities.

In addition to offering a chance to drink the latest trendy beverage, such long waits in line also give customers a chance to snap one or two photos of themselves holding the latest trendy drink against photo-friendly store interiors that include walls lined with tall glass cylinders filled with different types of tea leaves. Such photos can then quickly be uploaded to social media to show off to friends.

Each of Heytea’s 270 outlets across China, most in fancy shopping malls, sells an average of 1,500 cups of tea every day, said Nie Yunchen, CEO of Shenzhen Meixixi Catering Management Co. Ltd., the chain’s owner. That would translate to around 3 billion yuan in revenue annually with the unit price of a cup of tea sold for an estimated 25 yuan, according to Caixin’s calculations.

In July, Heytea raised a fresh round of financing led by social media giant Tencent and investment firm Sequoia Capital, giving it coveted “unicorn” status by pushing its worth above the $1 billion level with a valuation of 9 billion yuan, Caixin has learned.

Some were starting to express concerns about the market overheating as early as the second half of last year, as new entrants flooded into the space. Despite that, a flurry of newcomers has continued to join the frenzy, fueled by entrepreneurs and investors looking for the next big thing.

One milk-tea startup owner at Sanlitun told Caixin that venture capitalists had already approached him even though he only has two locations in Beijing.

The field of investors includes e-commerce giant Alibaba, which in July bought 6.32% of Cha Yan Yue Se, a well-known Changsha-based tea brand with over 100 locations. Even some coffee chains have entered the fray, including Luckin Coffee, China’s second-largest chain after Starbucks.

Other investors piling into in the space include Wang Sicong, son of one of China’s richest men, who has bought an undisclosed stake in cheese tea specialist Lelecha; and Richard Liu, founder of e-commerce giant JD.com, who personally invested 500 million yuan in InWe Cha in 2015.

The growing tide of investment has some worrying that valuations may be getting a little too frothy.

Starbucks racked up $24.7 billion in revenue in its 2018 fiscal year ended September last year, up 10% year-on-year. Its market value at that time reached $70 billion, giving it a price-to-sales ratio, seen as one barometer to estimate a private company’s value, of about three.

Heytea posted estimated sales of 3 billion yuan last year, up over 50% from the previous year. That would imply a market value of up to 12 billion yuan, based on an estimated price-to-sales ratio about four, equating to a slight premium over Starbucks’ three due to its big growth potential, one investor told Caixin.

But a consumer industry analyst said that even Heytea’s current 9 billion yuan valuation may be exaggerated, as teahouses usually make lower margins compared to coffee chains due to higher costs of raw materials and greater staffing needs. Heytea, which is still expanding rapidly and could even go global, may also face uncertainty due to challenges of maintaining consistent quality levels, said a coffee chain industry insider.