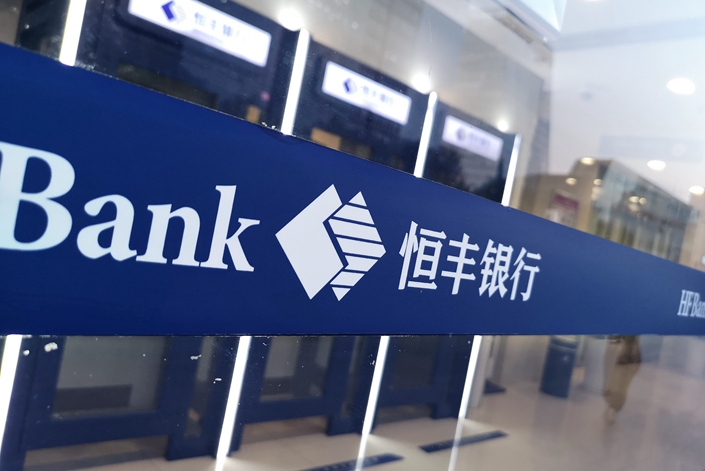 A branch of Hengfeng Bank in Beijing on Aug. 22. Photo: IC Photo

China’s banking regulator has signed off on Hengfeng Bank Co. Ltd.’s request to increase its registered capital, according to an official statement, paving the way for the troubled lender’s restructuring.

The China Banking and Insurance Regulatory Commission (CBIRC) has given Hengfeng Bank approval to increase its registered capital to 11.2 billion yuan ($1.58 billion) from 1.7 billion yuan in 2008 (link in Chinese), according to a release (link in Chinese) that the CBIRC published earlier this month.

The increase in registered capital is a bookkeeping measure to officially recognize the capital that Hengfeng Bank has received over the last 10 years.

It does not account for a new investment that the bank recently received approval for, according to a person close to Hengfeng Bank’s top executives.

Caixin revealed in August that Hengfeng Bank received official approval for a restructuring plan that involves a 30 billion yuan investment from an entity controlled by the provincial government of Shandong, where it is based. Also, Central Huijin Investment Ltd., a domestic arm of China’s sovereign wealth fund China Investment Corp., will become a strategic investor in the bank.

Hengfeng Bank ran into trouble in 2016 when several news publications said they received reports from an unnamed whistleblower accusing top executives of embezzlement. The whistleblower alleged Cai Guohua, chairman of the bank between 2013 and 2017, and others misappropriated millions of yuan, a charge later reiterated by the bank’s former president, Luan Yongtai.

Cai, who became chairman of the bank at the end of 2013, fell under investigation in November 2017 due to “severe violations of (Communist Party) discipline and law,” according to Shandong authorities.

In July 2018, prosecutors accused Cai’s predecessor, Jiang Xiyun, of embezzling 750 million yuan of the bank’s shares while he was its chairman from 2008 to 2013. A verdict in the case has not yet been announced.

Hengfeng Bank had 1.2 trillion yuan in total assets at the end of 2016, according to its annual report (link in Chinese) for that year, the most recent one it released.