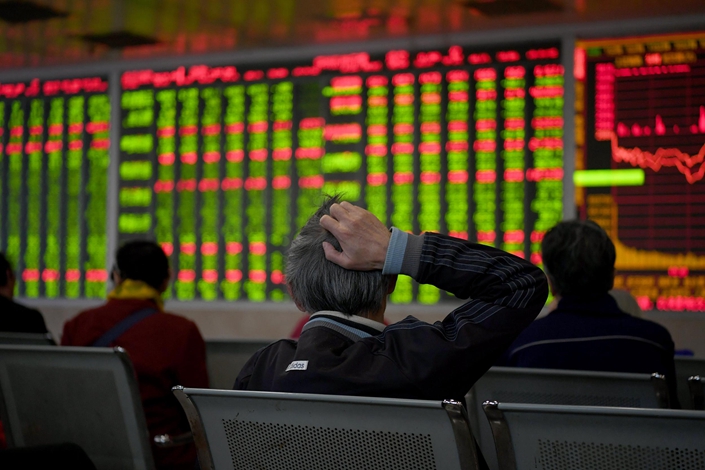 Shanghai’s new Nasdaq-style high-tech board, the STAR Market, appears to be losing its luster after an initial frenzy when it opened in July, with the latest batch of initial public offerings (IPOs) getting a subdued response from investors.

Shanghai Haohai Biological Technology became the first company to see its shares fall below their offer price on Wednesday when the stock dipped to 88.53 yuan ($12.63) as soon as the market opened. That compared with the 89.23 yuan investors paid when they bought the securities in the IPO. The shares later recovered and were trading at 89.85 yuan when the market closed. The stock surged as high as 149.3 yuan in first-day dealings on Oct. 31 but has drifted lower ever since.

Tianjin Jiuri New Materials, a chemical products manufacturer that only listed on Tuesday, has fared even worse. It has already won the title of the IPO with the smallest price spike in first-day dealings — the shares rose just 6.42%, beating the previous record-low gain of 26.4% recorded in the debut of Baolande on Nov. 1. And during Wednesday trading, the stock dropped below its offer price of 66.68 yuan.

The performance of the two companies is in stark contrast to the soaring prices seen when the STAR Market opened on July 22 when 25 stocks started trading. Those lucky debutantes saw their shares rise by an average 140% from their IPO prices, with Anji Microelectronics Technology (Shanghai) Co. Ltd. seeing the biggest gain of over 400% and Harbin Xinguang Optic-Electronics Technology Co. Ltd. showing the smallest jump, closing up 84%.

The first batch of IPOs were massively oversubscribed and investors who failed to win allocations dived into the market when trading started, driving prices even higher. The excitement and expectations of many participants of making a quick profit led some analysts to warn that IPOs were being priced too high and that over-enthusiasm by investors was driving stock prices to ridiculous valuations.

Reality now appears to have taken hold — first-day dealings of newly listed companies are seeing much smaller gains and only eight of the 46 stocks now listed on the STAR Market closed higher on Tuesday. Many investors and speculators have left the market and the volume and value of trading have slumped since the initial surge in July and early August. The daily value of shares changing hands hasn’t topped 12 billion yuan since mid-August.

A report from Shenwan Hongyuan Securities Co. Ltd. pointed out that with the increase in the supply of new stocks on the high-tech board, the average price gain on first-day dealings has fallen. Almost 80% of the companies listed on the board are now trading lower than their closing high on first-day dealings, with an average drop of 27.4%.

Analysts told Caixin that the market would inevitably fall back to rational levels and stock prices are increasingly reflecting companies’ underlying business performance.

Zhao Huan, an analyst at Fortune Securities, told Caixin that the initial phase of hype and overvaluation has now given way to an adjustment phase. The overall downturn of the STAR Market and the recent relatively good performance of the traditional bourse in Shanghai has prompted some market players to shift their attention back to the main stock market.

Gu Yongtao, a strategist with Cinda Securities, attributed the decline in interest in the STAR Market partly to waning risk appetite among investors and their reluctance to trade in such a volatile market.

The roller coaster ride of the STAR Market could also be a reflection of investors, companies and their advisers slowly finding their feet with the new IPO system.

The new board has been used as a testing ground for reforms of China’s stock markets, including registration-based listings which give market players the power to price IPO shares.

With no history of pricing IPO shares and with no limit to valuations, the market, companies and their advisors grappled with how to decide on a fair price. Some analysts have told Caixin that the fact some stocks have dropped below their issue price implies that some were priced too high, especially in terms of their price-to-earnings (PE) ratio, a key metric for valuing a company. The average PE ratio in the STAR market is 64.1, more than four times that in the main board of Shanghai bourse, although the higher ratio is supposed to reflect the better growth prospects of the companies on the new board.