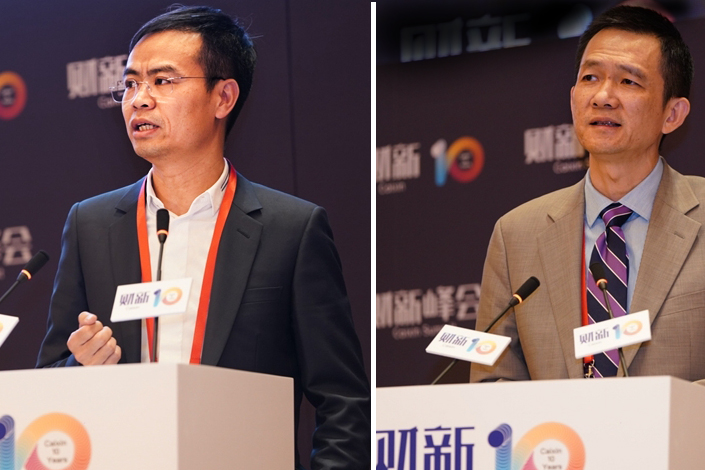 China still has more potential for tech innovation than anywhere else in the world, though the question of how to regulate new technologies remains a challenge, industry insiders said at the Caixin Summit over the weekend in Beijing.

After the rapid growth of Chinese technology startups over the past decade, they now face challenges in financing and regulation. Those challenges exist, both at home and abroad, said Lai Xiaoling, partner at venture capital firm Shunwei Capital.

As examples, Lai specifically pointed to the recent setbacks of WeWork and Uber Technologies Inc. The companies, both of which were once tech darlings, have seen their value plunge amid questions about their businesses.

The dividends brought by the rapid growth of mobile internet may have reached their limit, at least for the time being, Lai said Saturday at a panel discussion on digital technologies at the Caixin Summit.

Other once-promising unicorns have also seen their valuations shrink, said an executive from a company that invested in Xiaomi 10 years ago. The executive said that the majority of investors who put money into the last round of Chinese company IPOs have lost money.

Funding has recently become much harder to come by for startups, but Lai said the increase in investor caution was a good thing after the somewhat irrational pursuit of the tech businesses in the past few years. He said the change was no reason to be pessimistic.

New technologies are still disrupting industries and lifestyles, so challenges continue to mount for policymakers. Artificial intelligence (AI), for example, poses a threat to workers and will create employment issues for the future economy, said Yao Yang, dean and professor at Peking University’s National School of Development.

Besides possibly worsening the economic imbalance brought by advancing technologies, Yao stressed that regulators and tech innovators should be more discerning about what kind of technologies should be pursued, and what should not be. Advancement of some technologies shouldn’t get ahead of regulation, Yao said, offering the example of the enormously controversial human gene editing experiments by Chinese scientist He Jiankui. “Tech inventors and promoters should set boundaries for themselves,” he said.

When it comes to developing AI, the more data, the better for the accuracy of the technology, Yao said. “In San Francisco, facial recognition technologies have been strictly regulated with clear rules, but we (in China) have not put forward any restrictions,” he said.

Hotels, for example, have been prominent users of the technology. “In China, more and more hotels are asking to take pictures of guests for use in facial recognition,” Yao said.

Countries that have created tighter data protection rules have put themselves at a disadvantage in relation to AI advancement. Other countries have recognized this and have started discussions to address the issue of unfairness, Yao said.

AI is one of the hottest fields in tech. The Chinese market will grow to be worth about $7 trillion by 2030, according to estimate by consultancy PwC, the brand name of PricewaterhouseCoopers.