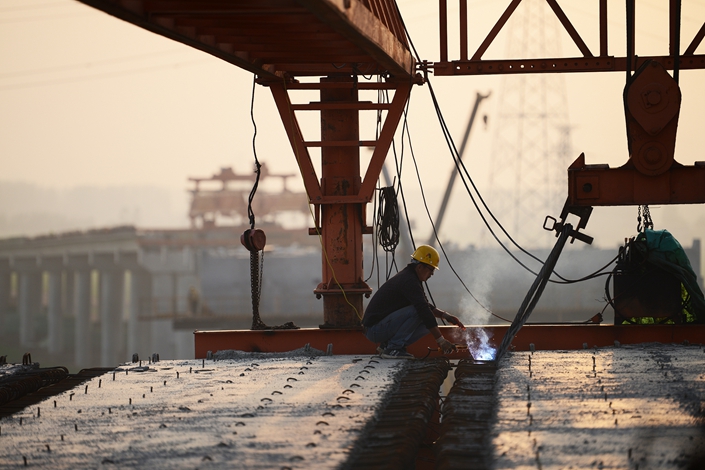 China’s cabinet has decided to relax financing requirements for some infrastructure projects in its latest bid to prop up growth as the world’s second-largest economy continues to slow.

The State Council said it will cut the minimum capital ratio requirement for ports and shipping infrastructure projects from 25% to 20% of the total investment. The ratios for highways, railways, environmental protection facilities and social service infrastructure projects may also be reduced by up to 5% on a case-to-case basis.

To receive the lower initial investment requirement, projects must have a clear expectation of investment returns, a reliable revenue source and manageable risks, the State Council said.

The decision, announced after a Wednesday cabinet meeting chaired by Premier Li Keqiang, followed a series of pro-growth measures made by the government to address downward pressure on the economy amid the bitter trade war with the U.S. and weakening domestic momentum.

China’s gross domestic product expanded at 6.0% in the third quarter, the slowest pace in nearly three decades, reflecting sluggish demand both at home and abroad.

Data released by the National Bureau of Statistics (NBS) Thursday indicated a continued slowdown in key economic activities as several major gauges posted multi-month or even multi-year lows. Fixed-asset investment, a key driver of domestic demand that includes infrastructure investment, increased 5.2% year-on-year in the first 10 months of this year. The cumulative reading marked the fourth straight monthly deceleration, and the lowest growth rate since the whole of 1995.

China has since 1996 required government-backed infrastructure projects to put up a certain amount of capital as initial investment apart from debt and equity financing. The minimum ratio of such capital has varied over the years according to macroeconomic conditions. The last adjustment was made in September 2019, when the State Council lowered requirements on certain types of projects.

After the recent changes, the minimum capital ratio requirement for government-backed infrastructure projects will range between 20% and 40% with steel, aluminum and cement projects facing the highest requirements.

Ji Fuxing, a senior expert at state-backed think tank the Chinese Academy of Social Sciences, said the lowered capital requirement will help expand and accelerate infrastructure investments as many projects are hampered by capital strains as local government coffers are squeezed by declining revenues due to tax cuts and economic slowdown.

Top policymakers this year have issued an array of policies to ratchet up infrastructure investment to help arrest downward risks on the economy. They have encouraged the growth of bank lending and increased the quota for special-purpose bonds, which are meant to be repaid from income generated by the projects they invest in rather than from local budgets. The quota was increased by 59% this year to 2.15 trillion yuan ($307 billion).

In its annual work report delivered in the spring, the State Council proposed a plan to relax funding restrictions on initial investments in infrastructure projects. In June, the cabinet allowed local governments to use proceeds from special-purpose bonds as initial capital for infrastructure investments in certain areas, and expanded eligibility in September.

Despite the efforts, government-driven infrastructure investment rose by a slower 4.2% year-on-year pace in the first 10 months of the year, down from 4.5% over the first nine months, according to NBS data released Thursday.

On Wednesday, the cabinet also said infrastructure projects will be allowed to raise up to 50% of their minimum capital investment through equity financing. Previously, the initial capital investment was required to be funded by the government, state-owned enterprises or proceeds from special purpose bonds.

Li Linqi, chief economist at Lianxun Securities, said the new rule may mean that local authorities can raise part of the capital through trust plans or asset management products issued by brokerages and insurers, as well as private equity funds.

The cabinet reaffirmed its stance against excessive local government borrowing, saying that expanding the capital channel should not add to governments’ hidden debts or violate requirements on state-owned enterprises’ debt ratios.

Market expectations for more stimulus measures have mounted as the economy continues cooling. Many analysts said the quota of special-purpose bonds will be further expanded next year to over 3 trillion yuan. But most of them remained cautious about predicting a fast revival of infrastructure investment.