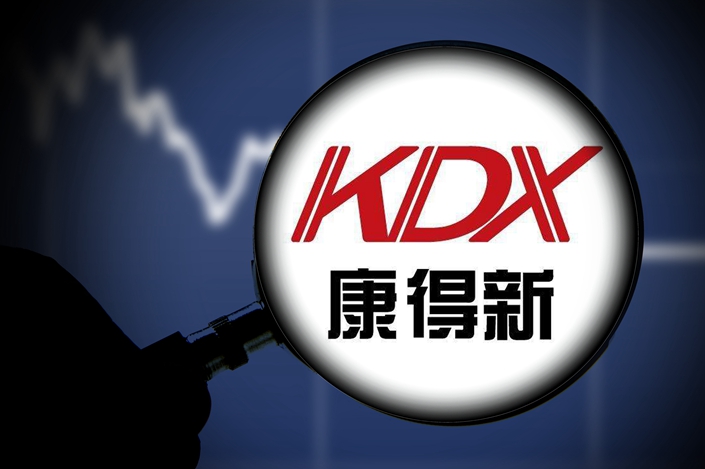 Scandal-plagued Kangde Xin Composite Material Group Co. Ltd. has been accused by China’s securities watchdog of faking documents to inflate its overseas sales, Caixin learned at a hearing in Beijing on Tuesday.

The accusation provides further detail about potential misconduct by a company that has defaulted on multiple bonds, allegedly inflated its profits, had its chairman detained and seen its auditor placed under investigation for negligence.

Kangde Xin faked its overseas sales figures by misrepresenting shipments of a plastic it uses in its production process as sales of its optical film products, said a representative of the China Securities Regulatory Commission’s (CSRC) provincial branch in the eastern province of Jiangsu, where the company is based. Under former Kangde Xin Chairman Zhong Yu’s instruction, the company shipped the products overseas and handed them out for free, then faked clients’ signatures to fabricate business contracts and create a fictitious overseas supply chain, the representative said.

“It’s like passing flour off as bread,” the CRSC representative said, adding that its investigative team has obtained both verbal testimony and documents confirming Kangde Xin’s wrongdoings.

Kangde Xin’s lawyers, however, argued in the hearing that the CSRC’s evidence was not enough to support the accusations. They said that overseas shipments and payments were real, citing customs records, without mentioning whether the company misrepresented the products. In their rebuttal, they said the CSRC failed to check the authenticity of the deals and sources of the payments.

Kangde Xin has been repeatedly found guilty of financial fraud. In January, the CSRC began investigating the company when it defaulted on its debts, and found that the company had overstated its profits by 11.9 billion yuan ($1.7 billion) over the course of four years through 2018. That investigation was later extended to include a probe into the firm’s auditor, Ruihua Certified Public Accountants, one of China’s largest accounting firms. On July 31, the National Association of Financial Market Institutional Investors (NAFMII), a bond market regulator, barred the company from any debt financing.

Kangde Xin rattled China’s bond market with several bond defaults this year. On Feb. 15, the company missed a 55 million yuan interest payment on a 1 billion yuan five-year note after defaulting on two short-term debt instruments totaling 1.5 billion yuan in principal in January. In March, the company failed to pay $9 million of interest on a $300 million bond.