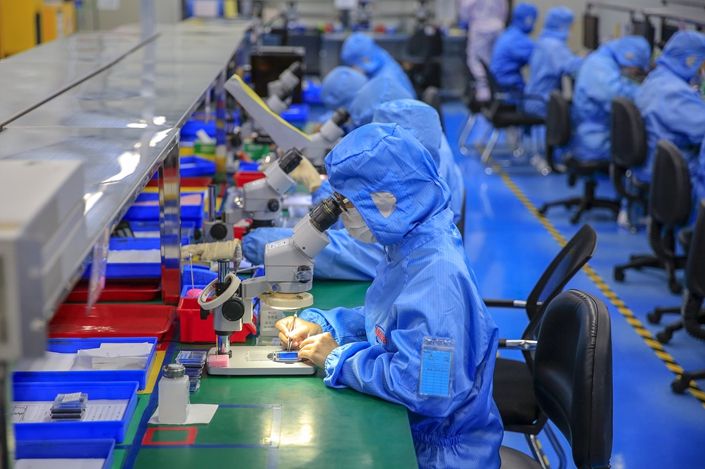 China will not arbitrarily adjust economic data from previous years to make it easier to hit its growth targets, a deputy head of the National Bureau of Statistics (NBS) said on Wednesday, seeking to squash speculation that officials will use the results of the latest national economic census to boost flagging gross domestic product (GDP).

China’s economy will expand by 6.1% in 2019, according to the median estimate in a Bloomberg News survey of analysts, the weakest gain in almost three decades. That’s down from 6.6% in 2018 and at the bottom end of the target range of 6% to 6.5% announced by Premier Li Keqiang in March. The pace could slide to below 6% in 2020, according to the forecasts of many economists. The steeper-than-expected slowdown has led some analysts to doubt whether the country can meet its target of doubling GDP and per-capita income in 2020 from 2010 levels.

The publication of some of the results of the fourth national economic census on Wednesday has triggered speculation that the government might use the survey as an opportunity to make upward revisions to historical GDP figures to help achieve those goals, which were set in 2012. The economy expanded 9.3% in 2011 before a revision after the third economic census boosted it to 9.6%. GDP growth has slowed to below 7% since 2015 and is expected to fall to within a whisker of 6% in 2019, dragged down by factors including sluggish domestic demand and the trade war with the U.S.

“I want to emphasize that GDP accounting is not influenced by other factors, only by principles of accounting methodology and changes in data sources,” Li Xiaochao, a deputy head of the NBS said at a press conference (link in Chinese). The bureau will announce revised historical GDP data soon, Li said, without giving a date, but adjustments will “not be due to other factors, such as achieving the growth target.”

Nevertheless, the results of the census could give GDP a boost and ease pressure on the government to implement stimulus to ensure the 2020 targets are met.

Zhang Yu, chief macroeconomic analyst at Chinese securities firm Huachuang Securities, said that if the statistics bureau raises aggregate real GDP growth for 2010 to 2018 by 0.2 percentage points, the goal of doubling GDP can be achieved with growth of just 5.8% in 2020. If the revised GDP growth figure can ease the pressure on growth goals and employment is stable, policymakers could be more tolerant of the declining growth rate in the next few quarters, she said.

The NBS conducted the country’s first national economic census in 2004, aiming to capture the vast changes that had taken place in the country’s economic landscape since the reform and opening up policy began in 1978 and especially after its entry into the World Trade Organization in December 2001. Although China’s statistics system was able to capture detailed information from its state-owned enterprises, a legacy of the planned economy era, it couldn’t properly measure the surge in growth in the private sector and in services industries that was taking place across the country. As statistics technology and methodology improve, authorities are also able to get a clearer picture of the Chinese economy.

Data collected through the census gives government number crunchers a much more accurate picture of what’s going on in the economy and how it’s changing. The results usually lead the NBS to revise numbers for individual industries and activities. The latest census shows the number of legal entities in the secondary and tertiary industry amounted to 21.8 million at the end of 2018, double the number at the end of 2013. Some 383.2 million people were employed in the secondary and tertiary industries, 27.2 million more than at the end of 2013.

The 2003 census led to a massive revision in the size of the economy in 2004, with the NBS estimating it was 16.8% bigger than it had originally thought. That catapulted China past Italy as the world’s sixth-largest economy. It leapfrogged the U.K. into fourth place in 2005, in 2007 it pushed past Germany to become the third largest and in 2010 it overtook Japan as the second biggest.

Subsequent censuses also led to upward revisions in the size of China’s economy, but by a much lower amount — 4.4% after the second census of 2008 and 3.4% after the third in 2013. The NBS also amended historical GDP growth data after each census, which, in most cases, led to higher growth rates. After the 2013 census, the bureau raised aggregate actual GDP growth from 2005 to 2013 by 1.05 percentage points.

For the latest census, which was carried out from January to April this year, 1.6 million enumerators fanned out across the country to conduct surveys and interviews with companies and businesspeople working in the manufacturing and services industries, the NBS said.

A previous version of this story stated the wrong year for when the NBS conducted its first national economic census. It was 2004.