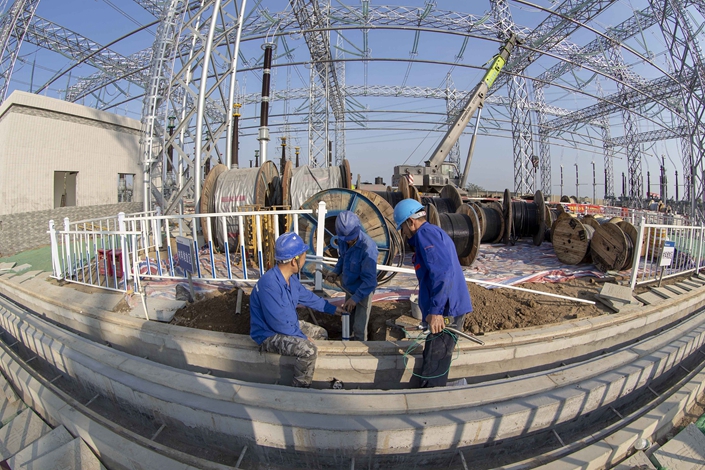 China’s Ministry of Finance said it has made an early allocation of 2020 special-purpose bond (SPB) quotas totalling 1 trillion yuan ($142.4 billion) to provincial-level governments as policymakers step up efforts to support flagging economic growth by encouraging investment in infrastructure such as roads, sewers and public services.

The allotment amounts to 47% of the SPB quota for 2019, which was 2.15 trillion yuan, and is within the cap of 60% approved last year by the National People’s Congress, the ministry said in a statement (link in Chinese) on its website Wednesday. The early issuance has been made to “speed up the sale of bonds to boost effective investment and increase domestic demand,” it said.

The statement confirms information which sources close to the matter gave to Caixin this week that the ministry had granted some provincial-level authorities their quotas for 2020 ahead of schedule. But they said issuance is unlikely to begin before January as some analysts have speculated.

Several financial officials in provincial-level governments told Caixin they have received their quotas, less than three months after the State Council announced it would allow SPB issuance for 2020 to start early to ensure funds are in place to allow projects to proceed in the first quarter of next year.

The finance ministry began assessing how much debt local governments need to sell in 2020 back in September, three months ahead of the usual schedule, indicating the government’s intention to shore up the economy through state-backed infrastructure investment amid mounting pressures from slowing domestic demand and the U.S. trade war.

Although some analysts have said issuance of SPBs out of 2020’s quota could begin by the end of the year, that looks unlikely for several reasons. Provincial governments still have to compile their 2020 budgets which will need to be ratified by the local congresses. In addition, projects funded from SPBs will still need to meet certain requirements on issues such as profitability, financing and equity backing. A local finance official told Caixin that the State Council emphasized last month that SPB issuance must meet these requirements and since then, the progress of project applications has seen a noticeable slowdown, which makes early issuance less likely.

SPBs were introduced in 2015 and are designated for investment in infrastructure and public welfare projects which are commercially viable. They must be repaid from income generated from those projects, in contrast with “general bonds,” which can be paid back out of fiscal revenue.

Annual debt quotas were originally issued after approval by the National People’s Congress at its annual session in March, but the legislature’s standing committee passed a bill in December 2018 allowing the State Council to assign up to 60% of quotas early.

With economic growth slowing more than expected during the course of 2019, the State Council urged local governments to speed up their issuance of SPBs and general bonds to fund spending and by the end of September they had used up almost all of their quotas for the year.

In its September statement announcing the early allocation of SPB quotas for 2020, the State Council said the proceeds should be used in projects such as transportation, energy, environmental protection, utility, health care and education and not for land reserves and property development.

Several analysts estimated that the SPB quotas for 2020 will probably be larger than 3 trillion yuan, an increase of at least 40% from this year’s 2.15 trillion yuan. The quota for general bonds for 2019 was 930 billion yuan.

However, infrastructure investment has remained sluggish in spite of efforts to spur spending over the past year. Government-driven infrastructure investment rose 4.2% year-on-year in the first 10 months of the year. Although that’s marginally higher than the 3.7% increase seen in the corresponding period of 2018, it’s way lower than the 19% recorded for the whole of 2017. Some economists have attributed the weak performance partly to the fact that large amounts of SPB have been used to buy land reserves and rebuild shantytowns instead of investing in infrastructure projects.