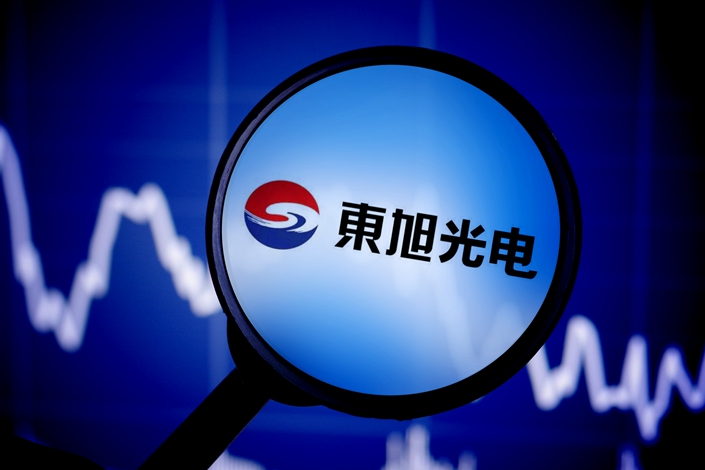 Another day, another bond default.

Tunghsu Optoelectronic Technology Co. Ltd. is the latest case. The Chinese electronics company sent jitters through the market last week by missing payment on more than 2 billion yuan ($305 million) of notes. Just weeks ago, the company reported having more than 18 billion yuan of cash.

Shenzhen-listed Tunghsu Optoelectronic, a maker of electronic display panels, said last Tuesday in a filing that it was unable to repay two bonds after bondholders exercised a put option, citing “short-term liquidity difficulties.” The news shocked the market as the company publicly promised to repay the debts on time only a week earlier. Tunghsu Optoelectronic has another 700 million yuan of bonds with a put option due in late December.

Some of the default cases this year shared similar traits — missing payments at a time when the market believe the issuers had enough cash.

Shenzhen-listed Kangde Xin Composite Material Group Co. Ltd. defaulted on several bonds this year even though its financial statements showed it had about 15 billion yuan in cash and bank deposits at the end of September. An investigation by the securities regulator found that the company faked documents to inflate its overseas sales. Kangde Xin’s chairman was detained on suspicion of embezzlement and fraud, and its auditor was placed under investigation.

In another case, Kangmei Pharmaceutical Co. Ltd., one of China’s biggest listed drugmakers, was accused of financial reporting fraud after the company was hit with a debt crisis, despite seemingly sound financials. The company also provided 11.6 billion yuan for controlling shareholder and affiliated companies to invest in stocks or repay debts, investigators said.

Tunghsu Optoelectronic reported in late October that it had cash and equivalents totaling 18.2 billion yuan as of the end of September. The company had interest-bearing liabilities of 21.6 billion yuan, including outstanding bonds of 5.3 billion yuan. In the first half this year, Tunghsu posted 8.5 billion yuan of revenue with 844 million yuan of net profit, according to the company’s financial report.

A Tunghsu Optoelectronic executive was cited by reports as saying that the default was directly triggered by a bank’s demand on the company to repay loans. The call for repayment of 2 billion yuan of loans caused a sudden liquidity crunch for the company, the executive said.

Investors are concerned about the potential ripple effects of the Tunghsu Optoelectronic default as it triggered the sell-off of bonds issued by sibling companies. Tunghsu Group, the parent company, has 15 outstanding bonds totaling 19.6 billion yuan, including 8.9 billion yuan set to mature within one year.

Tunghsu Optoelectronic is looking for a lifeline from the local government. The company said in a Nov. 19 filing that its parent’s controlling shareholder — Dongxu Optoelectronic Investment Co. Ltd. — was considering handing over a 51.5% stake to the state-owned asset administrator of Shijiazhuang, the capital of North China’s Hebei province.

Dongxu Optoelectronic Investment is 51.2% owned by Tunghsu Group founder Li Zhaoting and 48.8% by Huarong International Trust Co. Ltd. After the proposed stake transfer, Li would retain control of 48.5% of Tunghsu Group through his relatives.

But creditors of Tunghsu Optoelectronic are worried about the company’s capacity to deal with the debt crisis as most of its equity has been pledged for loans.

The company has been on a fast track of expansion since 2009, expanding its total net assets from 426 million yuan to 45.9 billion yuan through massive acquisitions. Its businesses range from optoelectronic display materials, manufacturing, new-energy vehicles and graphene production to environmental protection and real estate.

Tunghsu Group and its subsidiaries are known for their unusual financial arrangements — often involving huge amounts of cash holdings and debts. According to a company report, Tunghsu Group had 36.9 billion yuan of cash and equivalents as of June 30 with outstanding interest-bearing liabilities of 65.8 billion yuan.

The Shenzhen-listed unit Tunghsu Optoelectronic reported at the end of 2018 that it had cash holdings of 19.8 billion yuan and liabilities amounting 20.4 billion yuan. The company paid 1.2 billion yuan, or more than 30% of net profits, of interest during the period.

The Shenzhen stock exchange in May sent an inquiry demanding that Tunghsu Optoelectronic explain the reason it maintains high debt levels with abundant cash, causing excessive financing costs. The company replied that such practice follows industry needs and would not cause any risk to the company.

But “why can’t the company repay its debts if it has so much money on its books?” an investor asked.

Despite rich cash holdings, Tunghsu Group has appeared to be thirsty for funding. Market data showed that from 2015 to 2017, Tunghsu Optoelectronic raised a total of 18.8 billion yuan through three private placements even as the country embarked on a deleveraging campaign. Funds were used for new production facilities and acquisitions, the company said. Another Shenzhen-listed unit, Tunghsu Azure, also raised 11.5 billion yuan between 2016 and 2018 through share placements.

Tunghsu Group’s impulse for borrowing is also reflected by its foray into the financial sector since 2015. The company is now the largest shareholder of Tibet Financial Leasing Co. Ltd., Bank of Hengshui and Golden Eagle Asset Management Co. Ltd. It also owns a stake in Shanxi Shuozhou Rural Commercial Bank, according the business registration database Tianyancha.

Tunghsu Group has close ties with a number of small and midsize banks, including the embattled Bank of Jinzhou Co. Ltd., sources said. In late 2017, Tunghsu Group held 2.74% of the Hong Kong-listed bank before it disappeared from the bank’s shareholders list in mid-2016. But the company has remained a major client of the Liaoning-based bank, according to a media report.

“Tunghsu Group has a very tricky relationship with Bank of Jinzhou,” said a bond market source. The bank and another Hong Kong-listed lender are holders of a massive amount of Tunghsu Group’s debt, acting as main financing channels for the company, the source said.

Bank of Jinzhou was among several small regional lenders rattled by liquidity woes this year. The bank was bailed out by three state-owned investors in July and revealed a 4.54 billion yuan net loss in 2018 in a long-delayed financial report.

In late 2016, Tunghsu Group and Tunghsu Optoelectronic jointly set up a financial company to manage capital from Tunghsu Group and subsidiaries. According to the listed units’ reports, as of June 30 Tunghsu Optoelectronic and Tunghsu Azure transferred a combined 11.5 billion yuan to the financial company. It is unclear how the money was spent because of limited disclosure.

A bondholder of Tunghsu Optoelectronic said there are concerns that the money might be misused. “(We are) worried that the money may be embezzled by the large shareholder (for stock investment) … just like what happened in Kangmei,” the bondholder said.

A bank source told Caixin that Tunghsu Group is widely known as an active investor in the stock market using money borrowed from banks.

Bond investors said they have speculated that Tunghsu Group would default sooner or later amid rising doubts about the company’s asset quality. “There have long been expectations that Tunghsu bonds would fail, but it has always made successful issuance and repayment,” said one investor. “People feel it is unbelievable.”

Market sources said Tunghsu Group has spent heavily to cultivate relations with small banks and nonbank institutions to gain financing support. A number of major investors of its listed arms are wealth management products that are most likely backed by banks, a person close to the company said.

In August last year, Tunghsu Group was named by regulators among 26 companies that bought expensive but ineffective software from Dagong Global Credit Rating Co. Ltd. in exchange for better credit ratings for bond issuance. The episode sparked doubts on the quality of bonds issued by Tunghsu Group and subsidiaries. Dagong Global was banned from the bond rating business for one year.

Two weeks after the Dagong incident, Tunghsu Group announced the issuance of 2.6 billion yuan of three-year bonds yielding 8.18%. Guorong Securities was the underwriter.

“The issuance proved Tunghsu is welcomed by investors for its sound business operation and credit condition,” the company said in a press release at the time.

But many investors are not convinced, especially at a time when many Chinese private companies have been squeezed by debt pressures and forced to delay new issuances.

“No one would like to buy their debt; they must have bought it themselves,” said one investor.

In March, the securities watchdog issued a regulatory warning to Guorong Securities Co. Ltd., which brought to light a secretive corner of China’s bond market — the market for so-called structured bonds.

In a structured issuance, a bond issuer buys a portion of its own offering to inflate the issuance size and attract investors. It is known as a creative way for some companies to secure funding they couldn’t otherwise obtain based on their credit ratings. Although structured bond issues aren’t technically illegal, some top regulators have voiced misgivings.