By Chen Xi and Timmy Shen 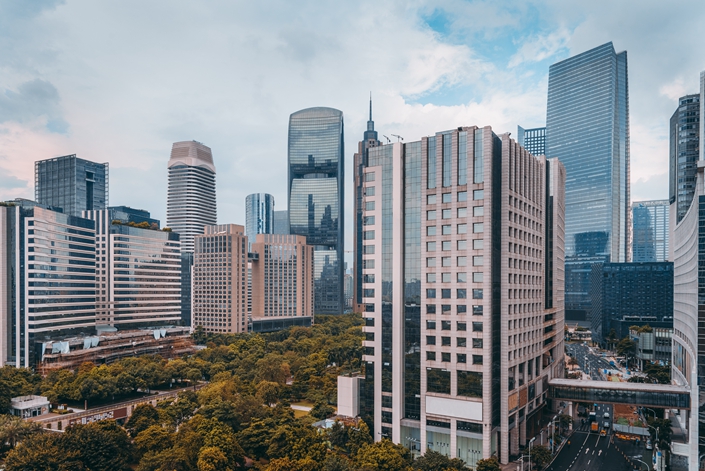 China’s northwest Qinghai region has come bottom of the league of 31 provincial-level governments ranked by one of the country’s major credit ratings agencies for the fifth year in a row as it struggles with a weak economy and a high debt burden relative to its fiscal firepower.

Qinghai, a sparsely populated province that’s highly dependent on the oil and gas industry, salt mining and animal husbandry, was given a credit score of 69.3 in the latest annual report from Golden Credit Rating International Co. Ltd., down from 73.2 in 2018. The southern coastal province of Guangdong came top of the list with a score of 89.6, regaining the top spot it lost in 2018.

The report highlights a wide divergence in the strength of local governments across the country that prompted the Ministry of Finance to make one of its key tasks (link in Chinese) for 2020 improving regional equality in terms of allocation of fiscal resources and promoting a new pattern of coordinated regional development. It also underscores the increasing costs some provinces and their local government financing vehicles (LGFVs) may face when they sell bonds this year, as they are forced to pay higher interest rates to reflect their weaker financial positions and credit rankings.

A report by Moody’s Investors Service in October said that while Qinghai’s total outstanding debt at the end of 2018 was 176.3 billion yuan ($25.7 billion), the third lowest in China, its debt-to-GDP ratio of 61.5% was the highest in the country. In contrast, Guangdong’s debt-to-GDP ratio at the end of 2018 was 10.2%, the second lowest in the country, even though its total outstanding debt was 995.8 billion yuan, Moody’s said in a report on the province in April.

Qinghai, a vast rural hinterland on the Tibetan Plateau, accounted for just 0.3% of China’s gross domestic product (GDP) in 2018 and has the second-lowest population in the country. Guangdong province, in contrast, accounts for around 10% of GDP and has the biggest population.

Golden Credit Rating’s report showed that the municipality of Tianjin, a port city near Beijing, was bottom of the table in terms of its ability to service its debts, with the heaviest burden when setting its own liabilities and those of its LGFVs against its available fiscal resources. Southwestern Guizhou, one of China’s poorest provinces, took the second-worst spot and Qinghai the third.

But despite the differences in credit scores among provinces, Golden Credit Rating said that overall, credit risks remain low because local authorities have diverse sources of fiscal income and a variety of administrative powers.

Nevertheless, investors are becoming pickier about the bonds they buy. There are big differences in the credit spreads between bonds of LGFVs backed by provincial governments and those of state-owned policy bank China Development Bank (CDB), reflecting the market’s perception of the bigger risks they carry. Data from Guosheng Securities show that on Dec. 31, 2019, the yield on bonds issued by LGFVs in four provinces – Heilongjiang, Jilin, Liaoning and Guizhou – was more than 300 basis points higher than those on CDB debt of the same maturity, while the spread on Shanghai-based LGFVs and CDB bonds was just 80 basis points, the lowest among all provinces. Those from Guangdong were 89 basis points.

Credit spreads did narrow on many LGFV bonds last year as fears of defaults receded after local governments stepped in to organize the repayment of debts at risk of defaulting. Their bonds are still considered a safe bet as their government backing limits the risk of default, according to a survey of investors by Bloomberg News.

China International Capital Corp. analysts said in a December research report that risks generally remained low for LGFV bonds due to the implicit guarantee they carry that local governments will bail them out in any threat of default. But the report singled out Qinghai, Heilongjiang, Inner Mongolia, Shanxi and Hainan as being most at risk of having to bail out an LGFV.

The latest reminder came last week when S&P Global Ratings cut the ratings of Qinghai Provincial Investment Group Co. Ltd. (QPIG), an aluminum and coal producer considered by some to be an LGFV, even further into junk-bond territory to “D” from “CCC-”. The company has seen multiple bond payment defaults over the past year and missed an interest payment due on Jan. 10, 2020, on its $300 million bond issue maturing on July 10, 2021.

“In our view, QPIG does not have the financial capacity to make timely and full payment on its debt obligations. We also do not expect the Qinghai provincial government to provide timely support to help QPIG meet its obligations,” S&P Global analysts said in a statement.