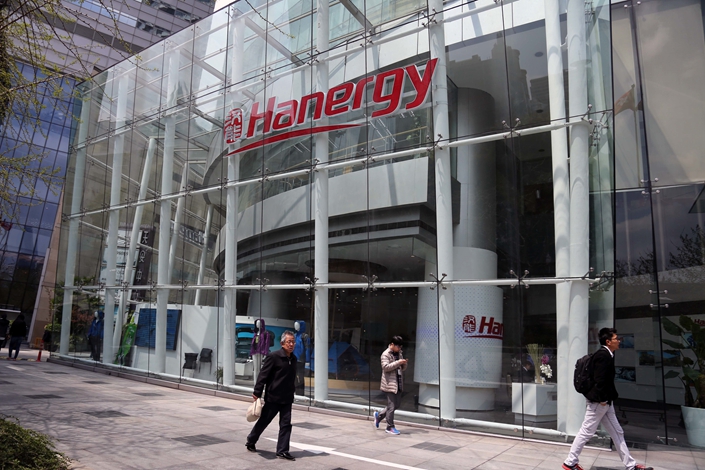 Embattled solar firm Hanergy holds a 12.5% stake in a company that raised $36.6 million that doesn't look like its going to be repaid to investors.

A company backed by embattled solar firm Hanergy Mobile Energy Holding Group. Co. Ltd. failed over the weekend to repay a tranche of debt raised to finance a factory project, and more payments are set to be missed through the end of February, according to a document obtained by Caixin.

The document said that neither Yingkou Jinneng nor its guarantor would be able to repay the debt in a timely manner, and that they had no specific plans to address the debt.

The initial fundraising plan in 2018 was for the debt to be paid back by the project’s revenue, however, construction was halted before completion as funding ran out, sources with knowledge of the matter told Caixin. Only part of the proceeds raised from the debt issuance went to the project, they said.

The debt was raised through financing products managed by Zhongrui Fund Management Co. Ltd., according to the document, which was issued by Zhongrui on Jan. 15. The products were set to mature in 18 months, with payments due on Jan. 19, Feb. 9, Feb. 16 and Feb. 19. The missed payment on Sunday was worth nearly 34 million yuan.

The financing products mostly raised funds from Hanergy staffers. Several of them told Caixin that they were urged by the company to buy and promote the products in 2018, with those who didn’t at risk of losing their jobs. Hanergy also reportedly encouraged its employees to borrow money to invest at the time, and around 10 banks including Huaxia Bank Co. Ltd., Bank of Nanjing Co. Ltd. and China Minsheng Banking Corp. Ltd. offered unsecured loans to its employees.

Hanergy directed staffers who bought the products to make enquiries about repayment to Zhongrui, the employees said. However, as both companies have started their Lunar New Year holidays already, these enquires have gone unanswered as of press time.

Some employees said that they are considering suing Hanergy or Yingkou Jinneng for illegal fundraising.

This is the latest financial and business difficulty to dog former solar superstar Hanergy. Hanergy Thin Film Power Group Ltd., one of its most well-known subsidiaries, was delisted from the Hong Kong Stock Exchange last year, four years after trading was suspended following an abrupt stock plunge that triggered an investigation by Hong Kong’s securities regulators.

In December, it was revealed that a multibillion-yuan industry park project in which Hanergy is a minority backer had ground to a halt as a company it controls had failed to provide necessary equipment.