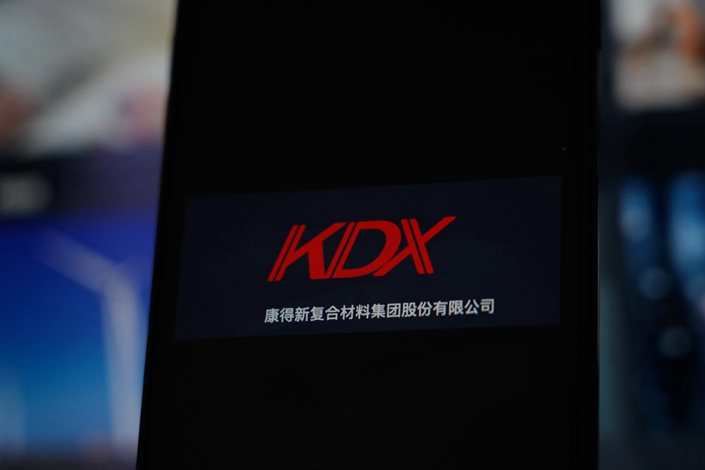 Kangde Xin is already awaiting the outcome of an inquiry related to its failure to repay the principal and interest on 1.5 billion yuan of bonds, a probe that exposed a massive financial and accounting fraud.

Scandal-plagued Kangde Xin Composite Material Group Co. Ltd. and its founder, Zhong Yu, are facing a new wave of investigations, this time over violations of information disclosure regulations in the bond market.

The laminating film manufacturer, based in Zhangjiagang city in the eastern province of Jiangsu, is already awaiting the outcome of an inquiry into the authenticity and accuracy of its financial statements stemming from its failure to repay the principal and interest on 1.5 billion yuan ($212.2 million) of bonds, a probe that exposed a massive financial and accounting fraud.

Kangde Xin did not provide any further details of the investigation in its filing (link in Chinese) to the Shenzhen stock exchange on Wednesday, although it said that two other company officials, Chairman Ji Fuxing and supervisor Zhou Guifen, are also being probed. The China Securities Regulatory Commission (CSRC) informed the group about the investigation on Tuesday, it said. Ji is also a vice president at Kangde Xin’s parent company, Kangde Group.

Separately, Xu Qiang, believed to be a former finance director of Kangde Group, is also being investigated over the same violations. Shenzhen-listed CECEP Solar Energy Technology Co. Ltd., where Xu is now and independent director, made the disclosure in a filing (link in Chinese) on Wednesday night. The statement said the probe does not involve CECEP itself, the company said.

The CSRC’s new investigation adds to the problems facing Kangde Xin, which is struggling to survive after a bond default in January 2019 led to the commission’s initial investigation that uncovered financial irregularities. About 15 billion yuan of cash and bank deposits shown on the company’s financial statements turned out to be an illusion, and an investigation by the commission found that sales and other documents had been systematically faked over a four-year period, which had inflated profits by a total of 11.9 billion yuan.

Zhong, who stepped down as chairman in February 2019, was detained on

suspicion of embezzlement and fraud, and the company’s auditor, Ruihua Certified Public Accountants LLP, was placed under investigation.

Kangde Xin rattled China’s bond market with a string of defaults in 2019. Multiple institutional creditors have filed lawsuits to recover their losses and asked the courts to freeze Kangde Xin’s assets and bank accounts, making it difficult for the company to find money to repay its maturing debts. A bondholder working in the banking industry told Caixin that most of Kangde Xin’s assets located in Beijing and Zhangjiagang, such as land and equipment, have either been written down or frozen by the courts.

The CSRC issued a statement (link in Chinese) in July 2019 accusing Kangde Xin of inflating its profits from 2015 to 2018 by boosting operating income through fictitious sales operations and inflating operating costs, research and development expenses and sales through fictitious procurement, production, research and development expenses, and transport costs. The CSRC said it found that Kangde Group had embezzled as much as 53.1 billion yuan of Kangde Xin’s funds from 2014 to 2018 through its accounts at Bank of Beijing Co. Ltd.

In April this year, the Beijing branch of the China Banking and Insurance Regulatory Commission urged (link in Chinese) Bank of Beijing’s Xidan branch to rectify wrongdoing in its cash management business after the latter admitted the balance of Kangde Xin’s deposit account was zero instead of the 12.2 billion yuan claimed in the company’s financial statements.

The CSRC pledged to punish those found guilty of any crimes and subsequently held hearings into the scandal in order to give all parties the opportunity to put forward their arguments. At a hearing in November 2019, the commission provided further details about Kangde Xin’s alleged misconduct. But so far no public announcement of any punishment has been made, although in July, the National Association of Financial Market Institutional Investors, a bond market regulator, barred the company from undertaking any further debt financing.