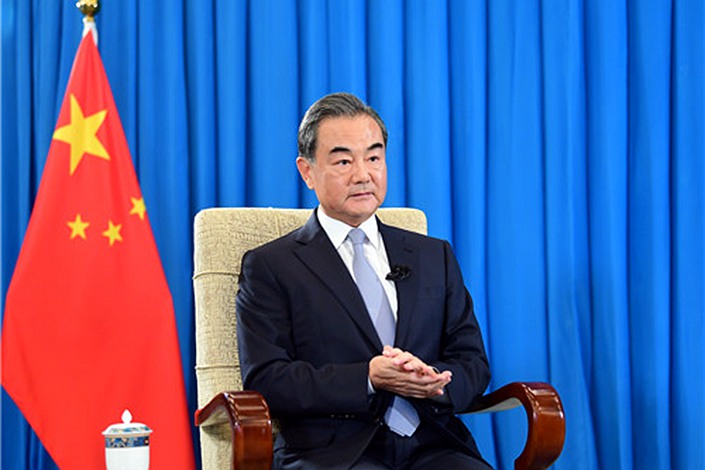 China ready to start talks with U.S. at ‘any level,’ foreign minister says

Foreign Minister Wang Yi said China rejects any attempt to create a “new Cold War” and urged a resumption of talks with the United States at any level about any issue as the relationship between the world’s two biggest economies hits its lowest ebb in decades.

In a wide-ranging interview with the official Xinhua News Agency Wednesday, the state councilor and top diplomat said China “is not the former Soviet Union” and has “no intention of becoming another United States.”

China “rejects any attempt to create a so-called new Cold War,” Wang said. “Anyone who tries to start a new Cold War in the 21st century will be on the wrong side of history and will only be remembered as the one who has upended international cooperation.”

China’s banking watchdog may loosen proposed regulations for how commercial banks classify their nonperforming assets, Caixin learned, marking a victory for lenders that complained draft rules published last year would be difficult to follow given their growing financial stress amid the country’s slowing economy.

The 2019 draft regulations covered a wide range of elements, including extending the scope of financial assets subject to a standard five-category classification system. The system, which previously applied only to banks’ loans in China, would include nonloan assets, according to the draft rules. They also specified that banks should classify all financial assets more than 90 days overdue as nonperforming.

To cover potential losses from nonperforming assets, commercial banks are required to set aside an amount of cash known as loan-loss provisions. However, some banks, especially small and midsized ones, have limited capability to replenish loan-loss provisions in response to rising bad debts amid the pandemic, a spokesperson with the China Banking and Insurance Regulatory Commission (CBIRC) said last month.

China’s insurance regulator issued a three-year action plan to promote high-quality development of the property insurance industry, the first such plan since the China Banking and Insurance Regulatory Commission was established in April 2018 by a merger of the banking and insurance regulators.

The plan aims to encourage the property insurance industry to transform from focusing on auto policies to parallel development of auto and nonauto insurance. Auto insurance accounts for more than 60% of China’s property insurance. Though the proportion is declining, it’s still much higher than the 30% proportion in major developed counties. The plan calls for a digital transformation by insurers, setting a goal of transferring 80% of major insurance business online by 2022.

The contribution of high value-added industries such as advanced materials and new energy to China’s total economic inputs declined in July, with capital, technology and labor inputs all down from the previous month, a Caixin index showed.

The Mastercard Caixin BBD New Economy Index (NEI) came in at 31.5 last month, indicating that new economy industries accounted for 31.5% of China’s overall economic input activities. The reading was down from 32.1 in the previous month. The drop in last month’s NEI was mainly due to a decline in the subindex for capital inputs, which has a 35% weighting. The subindex fell 1.3 points month-on-month to 41.2 in July.

Opinion: China’s STAR Market has had an impressive run. Investors should still be wary

China allowed more scheduled passenger flights from Japan and South Korea as the Asian countries gradually ease coronavirus travel curbs. But finding affordable tickets is still difficult for many travelers as average prices are up nearly tenfold amid high demand.

There will be 15 passenger flights between China and Japan every week in August, up from 12 a week last month, according to the Japanese embassy in China and airline companies. That will be after Chinese airlines including Juneyao Airlines, Spring Airlines and China Southern Airlines expand services starting Thursday. The three Chinese carriers were allowed to increase flights for the China-Japan routes after they met disease control requirements set by China’s civil aviation regulators.

Weekly flights between China and South Korea are also increasing to 15 in August from nine in July, including eight operated by Chinese airlines and seven by Korean carriers.

Tencent Holdings Ltd. is driving discussions to merge China’s biggest game-streaming platforms Huya Inc. and DouYu International Holdings Ltd., people familiar with the matter said, in a deal that would allow it to dominate the $3.4 billion arena.

The Chinese social media titan — which owns 37% of Huya and 38% of DouYu — has been discussing such a merger over the past few months, although details have yet to be finalized, said the people, who asked not to be identified because discussions are private. Tencent is seeking to become the largest shareholder in the combined entity, one person said. A deal would create an online giant with more than 300 million users and a combined market value of $10 billion, cementing Tencent’s lead in Chinese games and social media. Tencent and DouYu representatives declined to comment, while Huya spokespeople didn’t respond to requests for comment.

CATL, which partnered with the German company in 2018, aims to supply batteries for the Mercedes-Benz EQS, a fully electric luxury sedan that boasts that it can run more than 700 kilometers (435 miles) on a single charge, according a statement by Daimler AG, the parent of Mercedes-Benz. The agreement requires CATL to provide battery cells, modules and systems that are produced with net-zero carbon dioxide emissions. Mercedes-Benz aims to have a net-zero carbon footprint during production for all of its vehicles.

Chinese semiconductor stocks surged Wednesday after the country’s cabinet issued a set of policies to support the development of the integrated circuit (IC) and software industries.

The wide range of incentives, announced late Tuesday, include as many as 10 years of tax exemptions for qualified integrated circuit makers, a streamlined review procedure for IC and software companies’ domestic listings, implementation of intellectual property rights protection and encouragement of global cooperation. SMIC’s Shanghai-listed shares closed up 2.37% Wednesday after a jump of as much as 7.3% intraday. The company’s Hong Kong-listed shares rose nearly 5%.