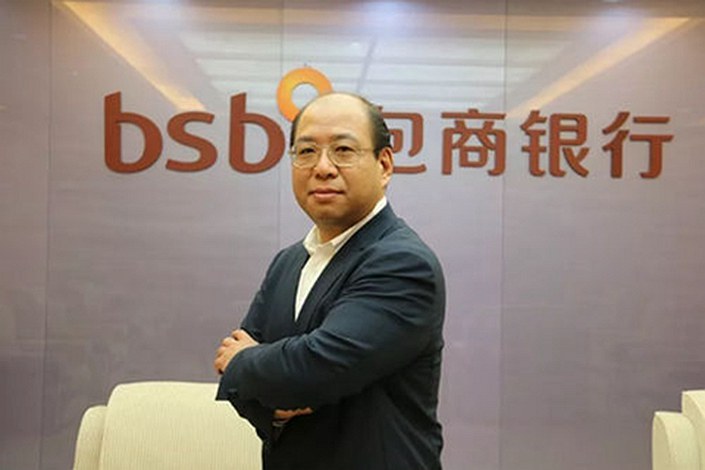 A former top executive at troubled regional lender Baoshang Bank Co. Ltd. has been detained by the police as part of a regulatory cleanup of the country’s first bank failure in decades.

Pan Huisheng, who was assistant president of the bank and a former head of the lender’s Shenzhen branch, was taken into custody in the Inner Mongolia autonomous region where the bank is based, Caixin has learned from multiple sources with knowledge of the matter.

It’s unclear why Pan was detained but sources told Caixin his transfer to police custody took place after he was recently interviewed by an inspection team sent into the bank by the regulator. On Nov. 23, the China Banking and Insurance Regulatory Commission gave its formal approval for Baoshang Bank to start bankruptcy proceedings and asked the bank to report any major issues uncovered during the process.

Pan is the latest official to fall in the wake of the collapse of the midsize lender previously controlled by financial conglomerate Tomorrow Holding Co. Ltd. whose founder Xiao Jianhua was detained by anti-corruption authorities in early 2017. A string of local regulatory officials have already been placed under investigation for their roles in the financial wrongdoing that led to the bank’s takeover by the state in May 2019. The lender was found to have a financial black hole of 220 billion yuan ($33.4 billion) due largely to the misappropriation of funds by Xiao.

Pan had been the legal representative of Baoshang Bank’s Shenzhen branch since its establishment in 2009. In 2015, it was fined (link in Chinese) 200,000 yuan by the banking regulator for granting loans on the condition that borrowers purchased savings products.

Under the government-led restructuring, Baoshang’s good assets were taken over by Mengshang Bank Co. Ltd., a new bank set up specifically to deal with the fallout from the lender’s collapse, and Hong Kong-listed Huishang Bank Corp. Ltd.

As part of the restructuring, Huishang Bank took over Baoshang’s Beijing, Shenzhen, Chengdu and Ningbo branches. Official records show that Pan was appointed legal representative of Huishang’s Shenzhen branch, which was set up in May, but was removed from the role in November.

Baoshang was among several lenders that showed up on regulators’ radar amid a broad campaign to curb financial risks in the banking sector. In August 2019, Hengfeng Bank Co. Ltd. received official approval for a restructuring plan led by the Shandong provincial government to rescue the bank from the verge of collapse, following the rescue of Liaoning-based Bank of Jinzhou Co. Ltd.