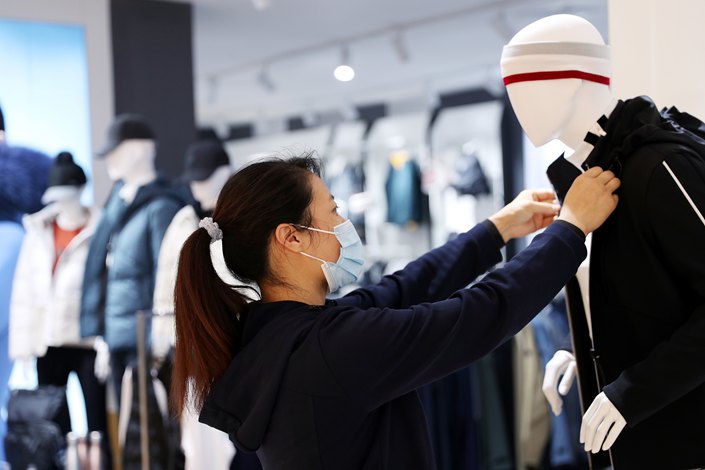 A store employee dresses a mannequin on Nov. 2 at a department store in Urumqi, Northwest China Xinjiang Uygur autonomous region.

Supply-side structural reform has been a top policy objective for China since it was first introduced by President Xi Jinping in late 2015, but a new buzzword has now entered the country’s economic lexicon — “demand-side reform” (需求侧改革).

The phrase made its public debut on Friday at the latest meeting of China’s Politburo, the ruling Communist Party’s top decision-making body chaired by the president, where leaders discussed economic policy priorities ahead of the annual Central Economic Work Conference expected to take place later this month.

“(We) should stick to supply-side structural reform while at the same time paying attention to demand-side reform to eliminate blockages, address shortcomings and link production, distribution, circulation and consumption to create a higher-level dynamic equilibrium in which demand drives supply and supply creates demand, improving the overall effectiveness of the national economic system,” the Politburo agreed, according to the official readout (link in Chinese) of the meeting issued by the Xinhua news agency.

Vice Premier Liu He alluded to the new focus in an article (link in Chinese) published late November in the People’s Daily, the flagship newspaper of the Communist Party.

He said that the major pain point in China’s economy still lies on the supply side, as supply-side factors have not been able to adapt to changes in demand. But while he called for a more “innovation-driven, high-quality supply” that could drive demand, Liu said the country should also attach great importance to “demand side management” and stick to the basic strategy of expanding domestic demand.

The greater focus on demand-side reform comes amid concern that the recovery of domestic consumption has lagged behind the rebound in exports and investment, the two other forces that drive GDP growth, after the Covid-19 pandemic was brought under control in China in the first quarter of the year. Government data show that in the first 11 months, retail sales declined (link in Chinese) by 4.8% and although growth turned positive in nominal terms in August and rose 5% in November from a year earlier, the recovery has lagged the performance of exports.

Demand-side economics posits that the economy is driven by demand for goods and services and by the purchasing power of consumers, whereas supply-side economics states that it is the production of goods or services that is of primary importance.

The Xinhua report didn’t mention any specific initiatives or strategies leaders are considering to push forward demand-side reform, but the government has already been pursuing policies that are considered to be part of demand-side economics because they stimulate demand. They include tax cuts to increase disposable income, higher government spending, and boosting investment, which also generates demand.

Some clues came out of the Fifth Plenum of the 19th Central Committee of the Communist Party, which took place in October and mapped out goals for the Five-Year Plan that will run from 2021 to 2025. The meeting proposed improving income redistribution through taxation, social security and transfer payments. It called for strengthening the role of taxation in redistributing income and gradually increasing the proportion of direct taxation, reasonably adjusting the distribution relationship between urban and rural areas, regions and groups, and developing charity and other public welfare programs.

The key to promoting consumption and boosting overall demand is to improve income distribution and put more money in the hands of low- and middle-income groups, analysts said.

High-end consumption and sales of luxury goods, cars and homes have increased significantly and the domestic consumption of luxury goods is expected to reach over 40% of the world in 2020, according to (link in Chinese) Li Xunlei, chief economist at Zhongtai Securities Co. Ltd. But the problem is with consumption among low-income households and the middle class, who make up the vast majority of the population. In addition to increasing incomes, expanding domestic demand will also involve narrowing the income gap, so that low- and middle-income groups dare to consume, Li said. “The reform of the income distribution system should be the focus of policy in 2021.”

The core of demand-side reform is to improve people’s consumption ability, which is related to income expectations, demographics and the social security system, Qu Qing, chief economist at Jianghai Securities Co. Ltd., wrote (link in Chinese) in a note on Sunday. It’s relatively easy to regulate enterprises from the supply side, but persuading consumers to spend money is more difficult, Qu wrote. He cautioned that unleashing demand and creating an environment to promote consumption cannot happen overnight.

The focus of expanding domestic demand needs to shift from investment to consumption, Zhao Wei, chief economist at Kaiyuan Securities Co. Ltd., wrote (link in Chinese) in a report on Sunday. Continuing to increase investment funded by debt is no longer sustainable, in view of the decline in the efficiency of investment that is now apparent, he said.

But other economists say that the role of investment, a key driver of demand in China, cannot be ignored. Rather, the focus needs to shift to spending on the “new economy,” a reference to technology- and innovation-driven high-growth industries, rather than traditional infrastructure investment and sunset industries such as steel that are suffering from declining returns on investment and are of less benefit to society.

Demand-side reform will drive the authorities to pour more money into new economy sectors such as 5G, big data, the Internet of Things and new energy, economists at Guotai Junan Securities Co. Ltd. wrote (link in Chinese) in a Monday note.

Continuing to pour money blindly into inefficient infrastructure and other investment projects with lower returns will have little effect on boosting economic growth but will further burden local governments with heavy debts and will lead to bigger financial risks, Li Qilin, chief economist of Hongta Securities Co. Ltd., wrote (link in Chinese) on Saturday.