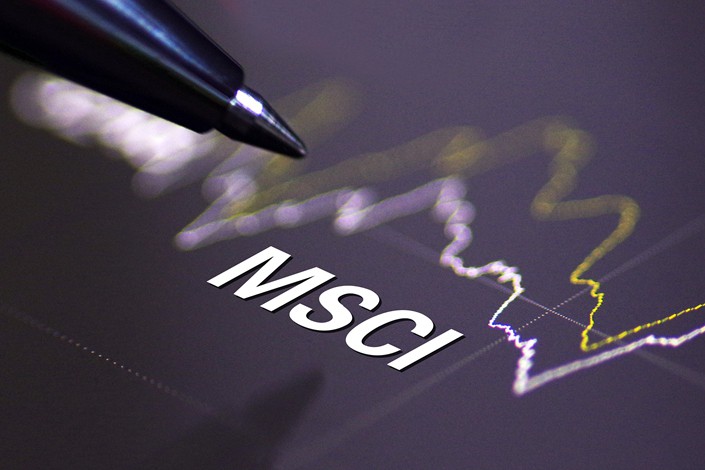 U.S. mutual funds were expected to invest $38.9 billion in A-shares by the end of 2020 as a result of their addition into the indexes of the three major providers.

MSCI Inc. has become the latest global index provider to remove Chinese stocks from its benchmark indexes after U.S. President Donald Trump’s administration blacklisted the companies over alleged links to the Chinese military and banned American investors from holding their shares.

The stocks of seven Chinese companies named in Trump’s November executive order will be taken out of several MSCI indexes at the close of trading on Jan. 5, the New York-based firm said on Tuesday, warning that there could be further deletions if the U.S. updates its blacklist, which now comprises 35 companies. At the same time, MSCI said it would launch parallel indexes that retain the deleted shares.

MSCI, which said it took the action following consultation with more than 100 market participants, follows two other global index providers who have taken similar action in response to the U.S. ban –– FTSE Russell and S&P Dow Jones Indices LLC (S&P DJI). New York-based stock exchange Nasdaq announced Friday that the shares of four Chinese companies on the list will be removed from indexes it maintains from Dec. 21, although they are not traded on the exchange itself.

Trump’s executive order, which is set to take effect on Jan. 11, “may have a significant impact on the investment processes of global investors,” MSCI said in a statement. Its ramifications “would effectively challenge the investability of the impacted securities from the perspective of international institutional investors,” it said. “In particular, non-U.S. market participants noted that the extensive presence of U.S. entities, such as commercial banks, broker-dealers, and custodians, within their chain of financial intermediaries would significantly limit their ability to transact in the impacted securities.”

The seven companies to be removed from MSCI’s Global Investable Market Indexes (GIMI) and from related non-market capitalization weighted indexes and relevant custom indexes are all on a list of “Communist Chinese military companies” compiled by the U.S. Department of Defense, which initially comprised 20 firms when it was released in June, although the number has now risen to 35.

As of Monday, the 10 securities of those companies accounted for about 0.3% of the value of the MSCI Emerging Markets Investable Market Index that includes almost 3,000 stocks, MSCI said.

China Mobile Communications Group Co. Ltd. and China Telecom Corp. Ltd. are among the largest companies by market capitalization included on the U.S. blacklist, but they have not been removed by any index provider so far.

MSCI was the first global index provider to include Chinese stocks in some of its benchmark indexes, announcing the first batch of companies to join its widely tracked gauges in May 2018 after several years of discussions with Chinese regulators and its customers. It was followed by FTSE Russell and S&P DJI.

The inclusion of mainland companies was expected to bring in billions of yuan of investment into domestic stock markets, but the string of recent announcements about deletions could disrupt foreign capital inflows in the short term, analysts said, although they expect the overall impact will be relatively small in the long run.

U.S. mutual funds were expected to invest $38.9 billion in A-shares by the end of 2020 as a result of their addition into the indexes of the three major providers, according to a July report by a division of the U.S. Securities and Exchange Commission.

At the daily foreign ministry press briefing on Monday, spokesperson Wang Wenbin said that the decisions of the index providers “will not prevent international investors from investing in these companies through other means and from reaping dividends from China’s development” and that the Trump administration’s crackdown on Chinese companies would be “detrimental to the interests of investors from all countries and the national interests and image of the United States.”