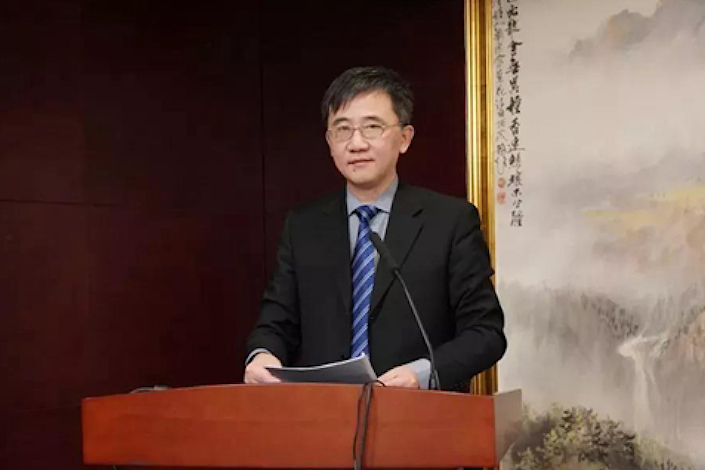 Troubled Sichuan Trust Co. Ltd. has agreed to a management overhaul after financial regulators seized control of the local trust company for failing to make good on a pledge to repay many of its investors in a debt crisis that has dragged on since May.

The southwestern province-based company has hired CCB Trust Co. Ltd., a state-owned trust company, to run “daily operations and management” until Dec. 25 of next year, according to a company statement issued Saturday (link in Chinese).

The reshuffle of Sichuan Trust’s board has resulted in Huang Xiaofeng, the chairman of Zhonghai Trust Co. Ltd., being appointed as the new chairman, sources with knowledge of the issue told Caixin. Shanghai-based Zhonghai Trust is the company’s second largest shareholder.

The drama of debt-ridden Sichuan Trust grabbed headlines in May, when the company missed repayment of its “trust of trusts (TOT)” products. This triggered investor protests and an ongoing credit crisis, culminating with the local Sichuan government and the national banking regulator’s local branch sending in a team last week to supervise its operations and push for a reshuffle of its management.

In China, trust companies use TOTs to invest in multiple other trusts, channeling money to a variety of projects. This structure creates an extra layer between TOT investors and the ultimate recipients of their funds, obscuring investment flows. Sichuan Trust in June warned investors that the company’s outstanding 25.3 billion yuan ($3.8 billion) of TOT products faced repayment risks.

In a statement last week, the Sichuan branch of the China Banking and Insurance Regulatory Commission blamed Sichuan Trust for failing to operate prudently and for allowing part of its funds to be embezzled by some shareholders. These shareholders have taken the company’s funds and refused to return them, defying the regulators’ orders to return them and seriously damaging other investors’ and creditors’ interests, the regulator said.

In seizing control of the trust company, the regulator said it would limit four of the company’s shareholders from exercising their rights, including its largest investor Sichuan Hongda (Group) Co. Ltd, and will push shareholders to pay back embezzled money.

The other three shareholders are Sichuan Hongda Co. Ltd., a company linked to Hongda Group, Sichuan Haoji Food Co. Ltd. and Huiyuan Group Co. Ltd. Executives of the shareholders who have been alleged to have committed violations have been restricted from travelling across borders, the sources said.

Chinese authorities have been tightening their grip on the once free-wheeling trust industry as part of a broad strategy to rein in financial risks. Last year, regulators penalized nearly one-third of the country’s 68 trust companies for violations including conducting illicit off-balance sheet lending and real estate investments, with fines hitting 22.5 million yuan.

In July this year, an official from CBIRC ordered that trust companies should not offer guaranteed returns nor make implicit guarantees.

Controlled by the large, state-owned lender China Construction Bank Corp., CCB Trust’s assets under management stood at 1.4 trillion yuan at the end of 2019, second only in scale to Citic Trust Co. Ltd. in the industry, according to their annual reports.