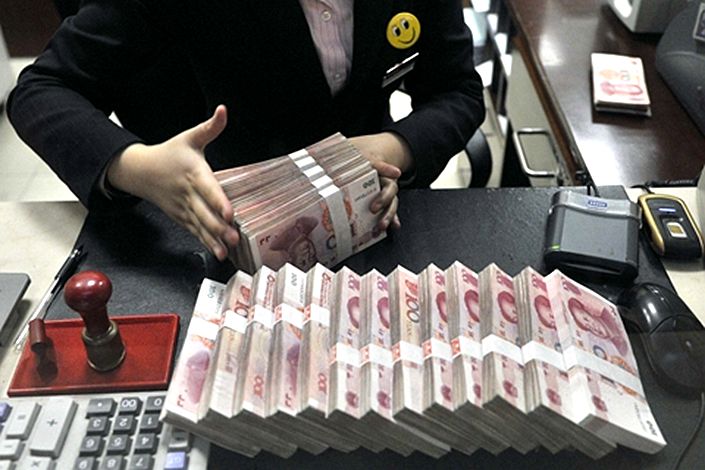 China’s local governments have been charged with cleaning up the problems at banks under their jurisdiction.

China’s strategy to beef up weak local banks and provide them with funds to increase lending has taken a step forward with five provincial governments raising 50.6 billion yuan ($7.84 billion) over the past month through the sale of special-purpose bonds (SPBs) after the State Council gave the policy the green light in July.

Guangdong kicked off the fundraising on Dec. 7 with the sale of a 10 billion yuan SPB. Zhejiang and Shanxi provinces, and the autonomous regions of Guangxi Zhuang and Inner Mongolia have also sold debt, bond filings show.

In total, eight SPBs have been issued and the proceeds are being used to inject capital into 29 banks and rural credit cooperatives through the purchase of shares or through subscriptions to a new type of instrument based on the traditional bank deposit agreement, or bank investment contract (BIC), according to the filings.

More bond sales are likely as the 18 provincial-level governments chosen by the Ministry of Finance race to use up the 200 billion yuan allocated to them for bank capital replenishment from 2020’s national SPB quota of 3.75 trillion yuan.

Hundreds of small banks and rural credit cooperatives are facing a growing crisis as bad debts have surged following years of aggressive lending and poor risk control. The economic slowdown and the fallout from the Covid-19 pandemic have exacerbated their problems and left them with weak balance sheets that fall short of the requirements set by regulators.

At the end of 2019, China had about 4,600 licensed financial institutions in the banking industry, some 4,000 of which were small and midsize banks that together accounted for roughly a quarter of the banking sector’s total assets, Zhou Liang, a vice chairman of the China Banking and Insurance Regulatory Commission (CBIRC), said early last year.

Central bank data (link in Chinese) released in April showed that of the 4,000, 605 did not meet the minimum required capital adequacy ratio of 10.5%, and 532 were labelled high risk.

The State Council, China’s cabinet, agreed in July to allow some provincial-level governments to use SPBs to recapitalize lenders. The new policy followed an 11-point reform program for the financial sector released in May that included the release of the “Work Plan for Deepening Reform and Supplementing the Capital of Small and Midsize Banks” to drive the overhaul of the sector and speed up capital replenishment for lenders with weak balance sheets.

Local governments have been told to take the lead in restructuring and recapitalizing smaller lenders, most of which are owned or controlled by provincial- and city-level governments either directly or through local SOEs and investment holding companies.

Inner Mongolia is the latest to go to the market. It was granted an SPB quota of 16.2 billion yuan for bank recapitalization and issued (link in Chinese) two 10-year bonds with a 3.54% coupon on Dec. 30 that raised a total of 8.5 billion yuan to replenish the Tier 1 capital of two local lenders.

The region, which has been heavily involved in dealing with the fallout from the collapse of regional lender Baoshang Bank Co. Ltd., plans to inject 5.5 billion yuan into Bank of Inner Mongolia Co. Ltd. through a BIC which is being treated as additional Tier 1 capital, part of the highest-quality capital that a bank has to absorb losses.

The capital replenishment will strengthen the bank’s ability to defuse financial risks and enable it to better serve local small and midsize enterprises (SMEs), a bond filing (link in Chinese) by the Inner Mongolia government said. It estimated that, after the fund injection, the bank’s capital adequacy ratio would rise to 10.56% at the end of 2020 and various capital indicators would be close to or higher than the minimum regulatory standards from 2021 to 2023. The new capital will be used to boost credit to local SMEs, and agricultural and green businesses, according to the filing.

Guangxi Zhuang issued three SPBs in December, raising a total of 11.8 billion yuan to replenish the capital of 21 institutions through BICs, according to filings (link in Chinese) posted on the website of the government’s finance department. The capital injections ranged from as little as 100 million yuan to 2.9 billion yuan, the filings show.

The provinces of Guangdong (link in Chinese) and Zhejiang (link in Chinese) will hand the proceeds of their SPB sales to local state-owned enterprises to buy shares in lenders rather than take out BICs. Guangdong plans to inject a total of 10 billion yuan into four banking institutions through Guangdong Yuecai Investment Holding Co. Ltd., a financial holding company owned by the government. Zhejiang plans to replenish the capital of one bank with 5 billion yuan while Shanxi plans to inject 15.3 billion yuan into a new, as yet unnamed, commercial bank created through the merger of five smaller provincial lenders.