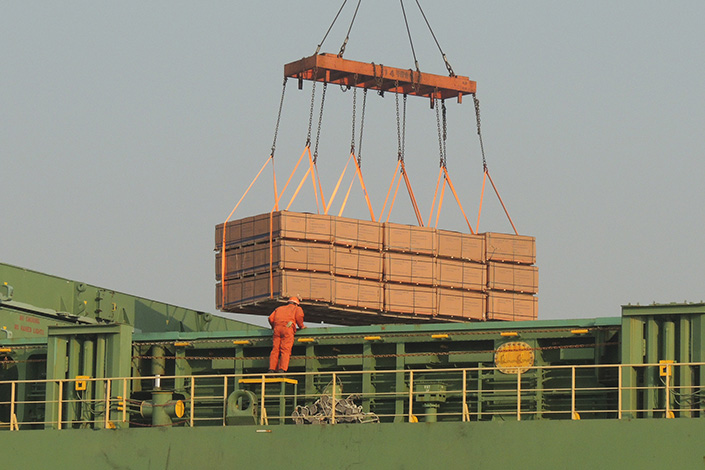 China’s import and export growth beat expectations in June, bolstered by a post-pandemic recovery in major economies and government policies to support domestic demand, data from the General Administration of Customs showed Tuesday.

But despite the strong figures, China’s Ministry of Commerce on Monday outlined measures to provide more support for foreign trade amid concerns that growth will eventually slow and as tensions with major trading partners including the U.S. continue to fester. The government will introduce targeted policies to help alleviate the difficulties faced by enterprises and “fully stabilize foreign trade and foreign investment,” Assistant Minister of Commerce Ren Hongbin told (link in Chinese) a press conference.

Imports rose to a record high of $229.9 billion in June, although the rate of growth slowed to 36.7% year-on-year from 51.1% in May, which was the biggest jump in a decade. The increase beat the median estimate for a 24% gain in Caixin’s survey. China’s trade surplus for June rose to $51.5 billion from $44.8 billion a year ago and was the highest since January.

“The good news is that China’s exports surprised on the upside in June,” Larry Hu and Ji Xinyu, China economists at Macquarie Group Ltd. wrote in a note. “While the demand from the U.S. is softening as expected, the recovery in Europe helped offset the weakness from the U.S. Along with the better-than-expected credit data, these data could help ease the recent concerns on China’s growth.”

The government will report GDP data for the second quarter of 2021 on Thursday. Analysts expect to see economic expansion return to a more normal pattern after an 18.3% year-on-year surge in the first quarter that reflected the recovery from the Covid-19 epidemic a year earlier when vast swathes of the Chinese economy were shut down. Growth likely slowed to 8.2% year-on-year, according to the median estimate of economists at 15 institutions in a Caixin survey.

Although exports have helped drive China’s recovery this year, headwinds are growing. Soaring shipping costs and a shortage of containers are affecting deliveries, while rising raw material costs and the appreciation of the yuan are eating into profits. These problems could blunt export growth in the second half of the year and especially affect small and midsize businesses.

The State Council flagged on Wednesday that more financial support was on the way to help companies impacted by soaring commodity prices and that more funding would be provided for banks through a cut in their reserve requirement ratio (RRR) so they could increase loans. Two days later, the People’s Bank of China announced the RRR would be lowered by 50 basis points effective Thursday.

The customs bureau also sounded a note of caution over the trade outlook.

“The development of foreign trade will still face quite a number of uncertain and unstable factors in the second half of the year,” Li Kuiwen, a spokesperson for the bureau, said at a press briefing (link in Chinese). “The coronavirus is still spreading at multiple places around the world and the pandemic situation remains complex.”

Li said the possible slowdown in trade growth in the second half would mainly reflect the higher base for comparison in the second half of 2020, although he added that “overall China’s foreign trade for the whole year still has hopes of achieving relatively fast growth.”

The Ministry of Commerce is playing its part to help exporters. Ren told Monday’s briefing that, “We will follow changes in domestic and international conditions closely and look into policies to address the outstanding difficulties faced by international trade businesses.”

He listed a series of measures the ministry would take to help stabilize trade and investment over the longer term, including promoting regional trade negotiations, building a network of free-trade zones, facilitating participation in the Belt and Road Initiative and developing new forms and models of business in international trade.