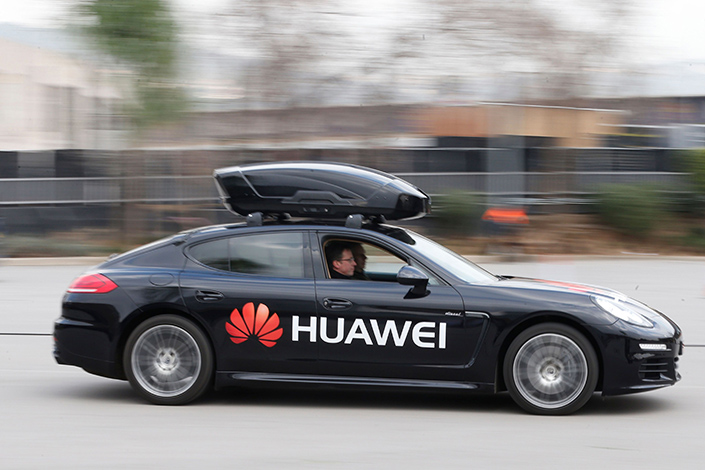 Huawei has been aggressively signing software development deals with carmakers as it seeks new revenue streams after U.S. sanctions put the squeeze on its smartphone businesses. Photo: VCG

Chinese telecoms giant Huawei Technologies Co. Ltd. has ousted a senior director at its smart car solutions unit from his position after his remarks about the safety record of Tesla Inc.’s self-driving feature — and autonomous driving generally — circulated online.

Su Qing, who led the smart driving product department under the company’s intelligent automotive solution business unit until he was removed Tuesday, had “made inappropriate comments on Tesla while participating in an external event and talking about autonomous driving technology and safety,” Huawei said in a statement to Caixin. Su will be reassigned after undergoing training, the statement said.

Su sparked controversy at the World Artificial Intelligence Conference held in early July in Shanghai, where he said during a panel discussion that Tesla vehicles have had a “rather high accident rate in the past few years”, and that “from the killing of the first person to the most recent person, the nature of the accidents is very similar.”

A video of his remarks was posted on popular social media site Weibo, where it quickly became a trending topic (link in Chinese) that racked up more than 300,000 views.

In the video, Su can also be seen saying accidents are bound to happen as AI machines are introduced and integrated into our daily lives, and the automotive industry should prioritize safety to avoid such accidents.

The Shenzhen-based telecommunications-gear maker has been aggressively signing software development deals with carmakers as it seeks new revenue streams after U.S. sanctions put the squeeze on its smartphone businesses.

The firm said in April that it had invested $1 billion in self-driving and electric-car technologies in an effort to move into new growth areas and offset the impact of the sanctions, which have crippled its microchip supply.

The company said its autonomous-driving technology has already surpassed Tesla’s in some spheres, for instance by allowing cars to cruise for more than 1,000 kilometers (621 miles) without human intervention.

Tesla Inc. became embroiled in a publicity crisis following a viral protest at the Shanghai auto show in mid-April over access to vehicle data related to a crash after a spate of accidents in China that soured public opinion toward the California-based company.

Last month, Tesla said it would recall more than 285,000 electric vehicles sold in China to address risks associated with its autopilot system following an investigation conducted by the State Administration for Market Regulation (link in Chinese).

“Huawei respects the efforts and contributions of every industry participant in the field of autonomous driving, and hopes to promote the development of autonomous driving technology alongside the rest of the industry,” the company’s statement. It did not reveal who will be taking over Su’s duties.