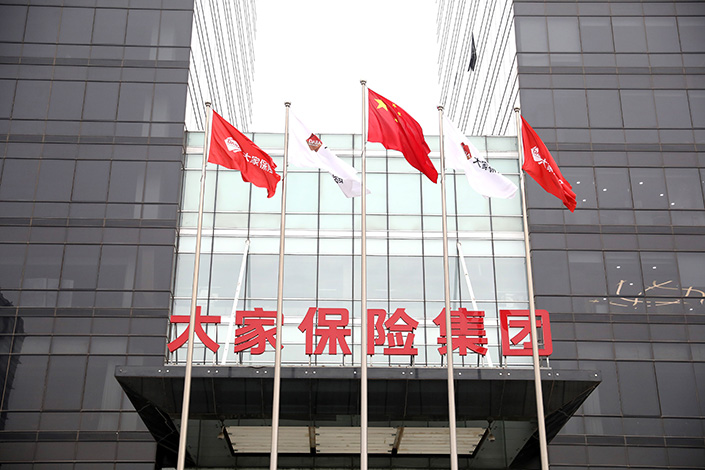 The offices of Dajia Insurance Group in Beijing in November 2020. Photo: VCG

The auction of what assets remain after the fall of Anbang Insurance Group Co. Ltd. has been postponed for two weeks as several potential bidders have dropped out, sources with knowledge of the issue told Caixin.

The process of soliciting investors for a 98.78% stake in Dajia Insurance Group Co. Ltd., which was created to take over Anbang’s core insurance and asset-management assets, has been extended to Aug. 26 from the initial deadline of Aug. 12, according to (link in Chinese) the Beijing Financial Assets Exchange (BFAE).

The stake valued at about 33.6 billion yuan ($5.2 billion) is now jointly held by China Insurance Security Fund Co. Ltd. (CISF), the operator of a state-owned bailout fund that has the larger portion, and state oil giant Sinopec Group.

According to the BFAE, the auction will be held only when there are two or more declared bidders, and the solicitation process will continue to be delayed in increments of five working days until enough bidders are in place.

The bidders’ lack of enthusiasm reflects the challenges facing the government’s efforts to get Anbang’s remaining assets back into private hands and recoup its bailout as much as possible.

Under the current conditions, it won’t be easy to find an investor with both the financial heft and regulatory compliance capability needed to handle Dajia’s enormous business and complex problems, the sources said.

In 2018, regulators took over the scandal-wracked and deeply indebted Anbang, marking the beginning of a state-led restructuring. Shortly after the takeover, CISF used 60.8 billion yuan to plug the hole in Anbang’s capital that its founder Wu Xiaohui had left by falsifying capital injections. Wu was sentenced to 18 years in prison for fundraising fraud and embezzlement in May 2018.

CISF established Dajia in June 2019 with the end goal of introducing strategic investors and turning it back into a privately owned company.