CX Daily: How The Taliban’s Return Shakes Up Central Asia 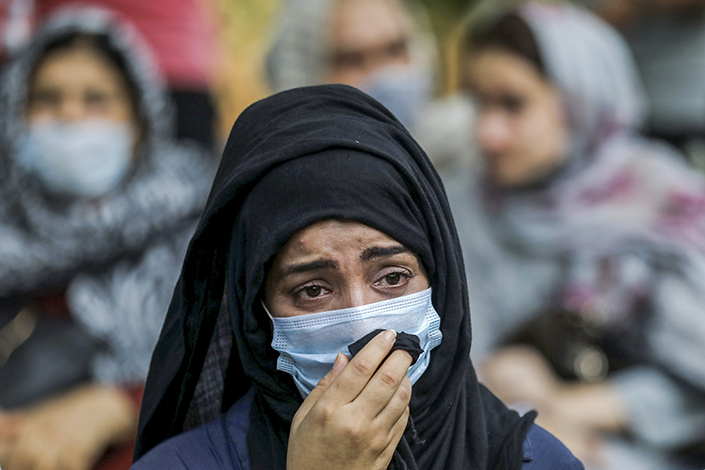 A woman cries at a meeting that urges international society to help Afghan women on Wednesday.

Cover Story: How the Taliban’s return shakes up Central Asia

Because of Afghanistan’s geographic location, the situation there always has far-reaching implications. With the accelerated withdrawal of the United States and other foreign troops and the Taliban’s lightning offensive to take over most of the country, Afghanistan’s neighbors including China, Russia, Iran, Pakistan and India have all started making moves, reshaping the region’s geopolitical landscape.

Since the end of the war in Afghanistan, China has been actively involved in the country’s reconstruction, providing grants, relief on debt service and tariff preferences and helping build infrastructure and train Afghan officials and technicians.

However, China has all along adhered to noninterference in Afghanistan’s internal affairs and avoided a military presence in Afghanistan, insisting that the future path of the country must be led and owned by the Afghan people. On the basis of full respect for Afghanistan’s national sovereignty, China has adopted a more flexible and pragmatic policy by maintaining contact and communication with all Afghan factions, including the Taliban.

Hong Kong Exchanges & Clearing Ltd. (HKEX) signed an agreement with MSCI Inc. to offer futures contracts based on the MSCI China A 50 Connect Index, tracking the performance of 50 Shanghai and Shenzhen stocks available via stock connect programs, the exchange said Friday. The product will be available Oct. 18, the HKEX said.

The MSCI China A 50 Connect Index is designed to offer a comprehensive representation of the Chinese economy by including 50 stocks of large-cap A-shares in 11 sectors and by targeting at least two stocks from each sector, the HKEX said.

The nomination, which has been expected since earlier this year, awaits confirmation by the U.S. Senate. The role has been vacant since former U.S. Ambassador to China Terry Branstad left the post in October.

Xiao was put under criminal detention by cops in the capital’s Chaoyang district after Hillhouse said that the misinformation made up by him had caused serious damage to Zhang’s reputation and its business, according to the statement (link in Chinese) released Saturday on social media platform Weibo.

Heavily indebted developer China Evergrande Group is in talks with several companies to sell its Hong Kong headquarters and a building in Guangzhou, sources told Caixin.

The negotiations show the growing seriousness with which Evergrande is taking a warning from China’s top financial regulators to “resolve debt risks” as the property giant struggles under the weight of $300 billion of debt at a time when the country is looking to prevent the real estate industry’s enormous liabilities from spilling over into the broader economy.

Potential buyers of the Hong Kong building include two state-owned enterprises in Guangzhou, Caixin learned from a source related to the Hong Kong capital market.

The Chinese version of international short-video sensation TikTok took down thousands of user-generated clips suspected of violating copyrights to a TV crime drama streamed on Tencent Video as legal tussles intensified over intellectual property infringement and online distribution rights between the companies.

The showdown pitting user-generated content against expensively produced professional video came to a head after Tencent Video, the video streaming platform owned by Tencent Holding Ltd., said last week it had filed a lawsuit against Douyin for copyright infringement and unfair competition, alleging it allowed users to upload content from “Crime Crackdown” without its consent, according to domestic media reports.

Officials in Hangzhou urged to clean up their conflicting business ties

The capital of East China’s Zhejiang province launched a campaign to crack down on illegal government-business ties (link in Chinese), urging local officials to examine their behavior and rectify their actions, the country’s top anti-corruption watchdog said Monday.

According to a statement from the Central Commission for Discipline Inspection (CCDI), nearly 25,000 local officials in Hangzhou, home to some of China’s top internet companies, including Alibaba Group Holding Ltd., have been ordered to conduct self-examination and self-rectification to prevent business-related conflicts of interest and illegal lending, and to regulate their business practices as well as those of their spouses and children.

The first case was a 44-year-old male Ethiopian engineer serving foreign freighters at the airport, and the second was 45-year-old freight worker, local health authorities said Friday. Both are fully vaccinated. All of their close contacts tested negative and were put under quarantine.