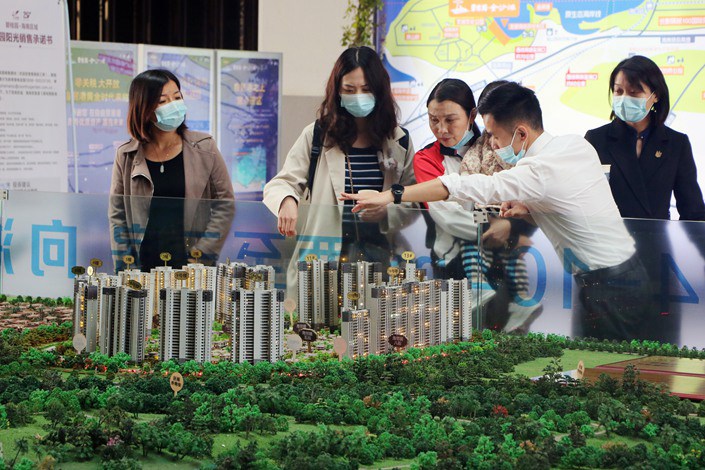 China’s property sector, traditionally a key driver of the country’s economic growth, had a rollercoaster year in 2021 as a booming performance in the first half turned into a slump triggered by the debt crisis at China Evergrande Group and regulatory curbs on borrowing. Analysts expect housing sales to continue falling this year and foresee more debt defaults by developers, which could become a drag on GDP.

Sales of new homes by China’s top 100 property developers dropped 3.5% to 11.1 trillion yuan ($1.8 trillion) in 2021, the first annual decline in more than a decade, data compiled by China Real Estate Information Corp. (CRIC) show. Almost 40% of the developers on the list saw a deterioration in their performance, and 36 recorded negative growth compared with 16 in 2020, according to a report released by the property consultancy on Dec. 31.

A top data management official in Xi’an was suspended from his post after the city’s health code system malfunctioned twice, preventing people from checking in to venues as the virus spread around the city.

It came as a local Covid-19 outbreak, first detected in December, neared 1,800 cases.

The system is critical for verifying the health status of residents and granting access to public places such as office buildings and supermarkets. It also contains Covid-19 test results needed for making trips between provinces.

China’s central bank indicated that strengthening regulation of the country’s booming financial technology (fintech) sector, which was hit by a series of crackdowns last year, will be one of its top priorities over the next four years along with promoting data application and green financial services.

Regulation is listed as one of eight key tasks in a summary of the Fintech Development Plan (2022-2025) announced by the People’s Bank of China (PBOC) Tuesday, which outlines its strategy for developing fintech and driving the digital transformation of finance. The proposals are based on China’s 14th Five-Year Plan, a roadmap for the country’s overall economic and social development from 2021 to 2025, and its long-term goals through 2035, the central bank said.

The Caixin China General Services Business Activity Index, which gives an independent snapshot of operating conditions in the sector, rose to 53.1 from 52.1 the previous month, according to the survey report released Thursday. Readings greater than 50 signal expansion.

The Caixin China General Composite PMI, which covers both manufacturing and services sectors, rose to 53 in December from 51.2 the previous month, according to the Thursday survey report.

Beijing ZHTD Environmental Protection Technology Co. plans to spend 468 million yuan ($73.6 million) for a 34% stake in Baotou Steel Group Energy Conservation and Environmental Protection Technology Industry Co. Ltd., ZHTD disclosed Wednesday. The deal will include a 209 million yuan purchase of newly issued shares of the Baotou Steel unit and a 259 million yuan stake purchase from the current controlling shareholder, according to a ZHTD filing with the Beijing exchange.

The Covid-19 outbreak in Xi’an is “the most serious” to hit China since the Wuhan outbreak, a top Chinese epidemiologist said, noting that the more transmissible delta variant is making it “extremely arduous” to control the disease in the city.

Zeng Guang, former chief epidemiologist of the Chinese Center for Disease Control and Prevention (China CDC), said in a state media interview that the capital of Northwest China’s Shaanxi province is battling a variant that spreads much faster than the Covid strain detected in Wuhan, Central China’s Hubei province, at the start of the pandemic. The outbreak has spread along multiple chains of transmission that have been harder for authorities to trace than in previous outbreaks in China, Zeng said.

Trending in China: Online fury ignited after woman miscarried while forced to wait outside hospital

Key Chinese textile, dyeing and clothing factories are shutting down for Lunar New Year weeks early due to a combination of sluggish orders and supply disruptions caused by strict measures to contain regional Covid-19 flare-ups.

Managers of several midsize textile enterprises in the provinces of Hebei, Shandong and Hubei said they would be starting the break weeks earlier than in previous years. New orders have languished since mid-December on weak overseas demand, and the supply of raw materials has been disrupted by a recent Covid-19 resurgence, Caixin learned.

It comes after 10 locally-transmitted cases were reported in Ningbo, Zhejiang, this month at a clothing factory owned by Shenzhou International Holdings Ltd., one of the world’s largest garment-making equipment manufacturers. In early December, a Covid outbreak in Shaoxing, another city in Zhejiang, forced the closure of key fabric factories there.

Trip.com lost a fraud lawsuit after the Chinese travel giant failed to notify a customer he was buying a hotel room from a third-party agent on its platform, leading the court to criticize the company for allowing price gouging.

Nasdaq-listed Trip.com Group Ltd. must pay the plaintiff, surnamed Hu, a total of 6,045.48 yuan ($948.50), according to a Tuesday ruling (link in Chinese) by the Shaoxing Intermediate People’s Court in East China’s Zhejiang province. The court upheld a decision made by a lower court in the city in July last year.

China’s market regulator slapped tech giants with a fresh round of fines for violating anti-monopoly rules — this time for failing to report their acquisition of stakes on other companies that gave them controlling power.

Tencent Holdings Ltd., Alibaba Group Holding Ltd., Bilibili Inc. and some private-equity investment companies were fined 500,000 yuan ($78,500) for each unlawful deal — 13 in total — according to notices published Wednesday by the State Administration for Market Regulation.

China State Railway Group Co. Ltd. revealed the revenue figure, which represented a year-on-year increase of 0.34%, at an annual working conference Tuesday, where it did not disclose its net profits or debt-to-asset ratio for the whole year.