CX Daily: How the Global Semiconductor Industry Turned Into a Free-for-All 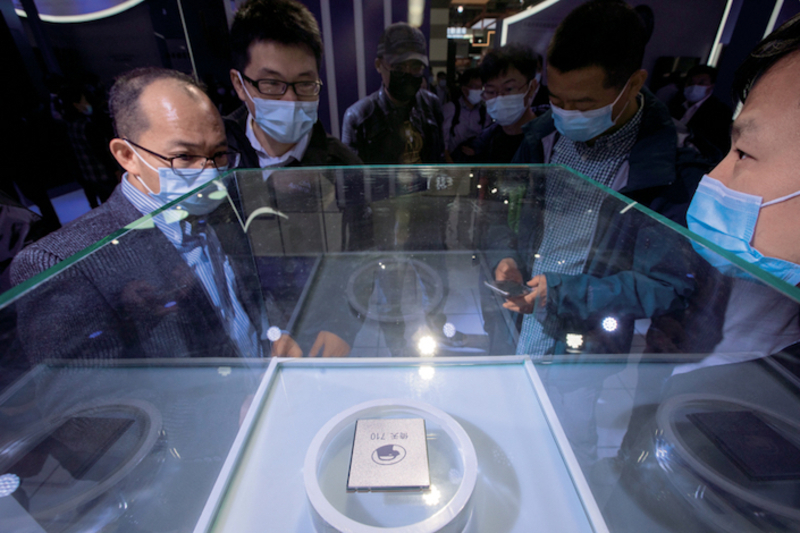 Cover Story: How the global semiconductor industry turned into a free-for-all

The global semiconductor industry is getting increasingly crowded as newcomers pour in from all fronts seeking to gain a foothold in advanced chips to power new technologies.

The rise of artificial intelligence (AI) has fueled demand for high-capacity chips as tech companies and device makers race to deliver smarter services and products. The global chip shortage throughout 2021 prompted many of them to rely more on themselves.

Cloud service giants Amazon and Alibaba Cloud released processors developed in-house late last year that will be used to power servers in data centers. The cloud unit of Tencent Holdings in early November said it started trial production of its own AI chip. In December, ByteDance, owner of short-video app TikTok, also announced progress in its own AI chip development as the company steps into the cloud market.

A city in China’s central province of Henan was the latest to report new local cases of the omicron variant of Covid-19 Monday as the country battles multiple flare-ups of the highly transmissible delta and omicron variants.

Posing a challenge to Beijing, which is scheduled to host the Winter Olympics next month, the emergence of local omicron cases in the northern port city of Tianjin over the weekend and the rise of delta infections in the provinces of Henan and Shaanxi have put local authorities on high alert, forcing them to beef up travel restrictions and mass testing.

The investigation by China’s top anti-graft authority into the chairman of state-owned China Life Insurance (Group) Co., came as no surprise, people with knowledge of the matter told Caixin, as the financial veteran’s past colleagues have fallen to corruption probes in recent years.

The Wang investigation is one of the latest in China’s years-long campaign to stamp out corruption, including in the financial system. Late last year, authorities launched a new round of inspections of the country’s 25 major financial institutions and regulatory agencies, which included China Life.

Chinese investment conglomerate Zhongzhi Enterprise Group will consolidate its four wealth management units into one and keep only one independent fund sales license.

The consolidation is at the request of regulators as part of China’s efforts to tighten oversight of the nation’s $13 trillion asset-management industry.

Wang Chaoyong, the private equity tycoon who was detained by police Nov. 30, was released on bail Thursday, Caixin learned from sources with knowledge of the matter.

On Friday, the founding chairman and CEO of Chinaequity Investment Co. Ltd., posted a series of 10 social media updates, relating to news of his company, according to the sources.

Opinion: Why 2021 was a great year for the opening-up of China’s financial markets

Xiaomi Corp. objected to a demand by the Indian government that the company’s local unit pay 6.53 billion rupees ($87.8 million) of import taxes the Chinese smartphone giant allegedly evaded over more than three years.

Xiaomi imported cellphones and parts without including in the transaction value the royalties and license fees paid by Xiaomi India to Qualcomm USA and to Beijing Xiaomi Mobile Software Co. Ltd., India’s Finance Ministry said Jan. 5 in a statement. The India Finance Ministry issued notices to Xiaomi demanding payment of 6.53 billion rupees for the period between April 2017 and June 2020.

The warning was issued after the shares closed below $1 for 30 consecutive business days through Jan. 3, Fangdd said in a Friday statement issued before trading began.

Huawei Technologies Co. Ltd. appointed the president of its carrier group to also head its enterprise group, Caixin learned, in the latest management change for a company reporting shrinking revenue amid U.S. sanctions.

Ding Yun, 53, will replace Peng Zhongyang as head of the enterprise business group, according to an internal announcement on Huawei’s bulletin system.