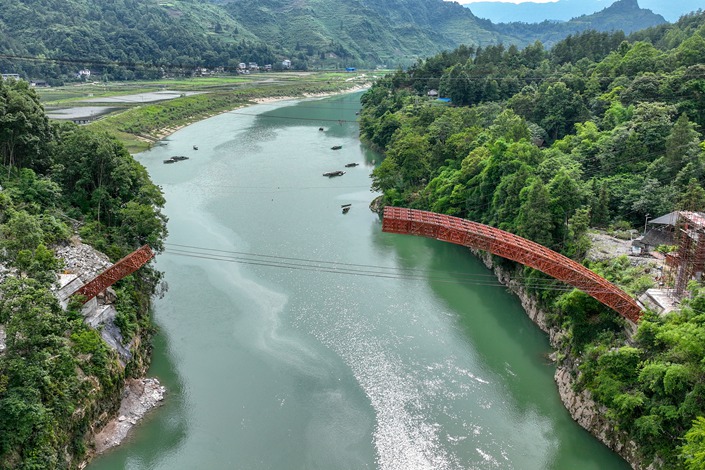 An under construction bridge in Chongqing on Tuesday. Photo: VCG

China is turning to its old stimulus playbook and pinning its hopes on infrastructure investment this year to rescue an ailing economy as policymakers scramble to shore up sentiment depressed by the country’s worst Covid-19 outbreak since early 2020.

At an April 26 meeting of the Central Financial and Economic Affairs Commission, President Xi Jinping called for an “all-out” campaign to boost construction of infrastructure, which he called “an important pillar of support for economic and social development.”

Officials in central China’s Henan province may have violated criminal law by abusing a health code system designed for pandemic control to block the mobility of petitioners swindled in a multibillion-dollar financial scam, a legal expert said.

A social media article that went viral Monday reported that a number of people across China unexpectedly saw their health codes turn red when they arrived in Zhengzhou, the capital of Henan, or planned to go there. A red code flags high risk of virus exposure and blocks people from free movement.

China’s youth unemployment rate in urban areas in May was the highest since records began in 2018 as Covid-19 lockdowns restricted mobility and weighed on the labor market, with the government warning the situation could get worse as millions of fresh graduates start looking for work.

The surveyed urban unemployment rate among workers ages 16 to 24 — which captures graduates from high school and college — climbed to 18.4% in May from 18.2% in April, according to figures released Wednesday by the National Bureau of Statistics (NBS). That’s the highest since the bureau started publishing the survey data in January 2018.

China will resume issuing visas for family visits to U.S. and Singaporean citizens, among others, more than two years after the country closed its borders to most incomers as part of stringent Covid control measures.

Starting Monday, foreign nationals from the U.S. and South Korea who are family members of Chinese citizens or family members with Chinese permanent residence permits can apply for a visa to China to visit relatives or reunite with families, according to statements issued by the Chinese embassies in the two countries.

The new rules governing mobile apps were revised and expanded from a previous version implemented in 2016 to adapt to the rapid development and widespread use of mobile apps, the Cyberspace Administration of China said.

The new regulations bar apps from providing products and services to minors that induce them to spend more time and money and from producing or disseminating information that endangers minors’ physical and mental health.

The former head of the agency responsible for managing China’s strategic food reserves is being investigated for suspected graft, joining dozens of current or former mid-level officials that have been probed this year as a decade-long crackdown on corruption shows no signs of ending.

Zhang Wufeng, former director of the National Food and Strategic Reserves Administration, is being investigated for “suspected serious violations of (Communist Party) discipline and law,” said a statement (link in Chinese) issued by the Central Commission for Discipline Inspection (CCDI) Wednesday. While the statement did not offer further details, the phrase is a common euphemism for corruption.

The ill-fated store, which launched in Yangpu in March 2020 as the first wave of the Covid-19 epidemic began to recede in China, was the only one of its kind built as part of a planned rollout across the country that, according to company representatives at the time, would use “big data” to analyze the characteristics of surrounding communities and localize their offerings.

One of Asia’s top sports properties is staying bullish on the China market as it continues to expand its brand globally.

Hua Fung Teh, president of One Championship Group, told Caixin that China remains “one of the most strategic markets” for the company in an exclusive interview during the World Economic Forum in Davos, Switzerland, in late May. One Championship, a mixed martial arts (MMA) company, was founded in Singapore in 2011 and entered the Chinese market in 2014.

China’s massive hydro energy storage goals may be getting bigger