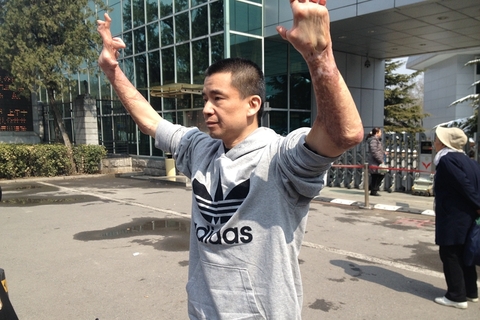 Chang Linfeng showed his hands to the media outside a Beijing courthouse on March 20, 2013, when he was acquitted.

In Depth: Verdict reversal in high-profile murder stands out amid exoneration trend

Since Chang Linfeng’s wife died in a fire 15 years ago, the Henan province man has been found guilty of intentional homicide and arson, had those convictions overturned, and was then found guilty of the same crimes at the end of last year.

The case was gruesome. Around 5 a.m. on May 16, 2007, Beijing’s fire department found the charred corpse of woman lying on her back in the makeshift mahjong room of a university faculty dorm at the Central University of Finance and Economics. A fire had been reported earlier. The victim, who last name was Ma, was a 42-year-old teacher who lived there with her then-43-year-old husband, Chang.

The slowing economy is putting significant pressure on China’s fiscal revenue, forcing some local governments to sell off idle properties or mining rights to raise funds.

General public revenue in the first seven months this year was 12.5 trillion yuan ($1.8 trillion), down 9.2% from a year earlier, according to the Ministry of Finance. Tax revenue rose just 0.7% from a year ago to 10.3 trillion yuan after tax rebates. Excluding tax rebates, tax revenue declined 13.8%. Nontax revenue increased nearly 20% and accounted for 17.9% of total general public revenue, the third-highest level since 1994.

An academic paper sparked controversy with its defense of the isolationist policies (闭关锁国) adopted during much of the Ming (1368-1644) and Qing (1636-1912) dynasties, which have long been seen by historians as a major reason for China’s relative decline in national strength.

The government-sponsored study argued that the policies were designed to counter “aggressive Western colonial forces” and defend China’s “territorial and cultural integrity.”

The Caixin China General Manufacturing Purchasing Managers’ Index (PMI), which gives an independent snapshot of the country’s manufacturing sector, came in at 49.5 in August, compared with 50.4 the previous month. Readings of less than 50 signal contraction.

PJSC Polyus, Russia's largest gold producer, became the second company in the country to sell bonds in Chinese currency as Russian businesses increasingly turn to China and the yuan for borrowing in the face of sweeping sanctions imposed by Western countries.

Polyus issued 4.6 billion yuan ($670 million) of yuan-dominated bonds Tuesday, according to bond sales documents. The five-year debt instruments have a coupon rate of 3.8%. Proceeds will be used for general corporate purposes and investments, the documents showed.

Wang, 63, who was also the state-owned insurer’s party committee chief, was found to have engaged in financial corruption, including illegally accepting cash and gifts as well as abusing his power to help with business deals and loans in return for large sums of money, the Central Commission for Discipline Inspection (CCDI) said in a statement.

Pinduoduo Inc. is preparing to launch a cross-border e-commerce platform targeting the United States, Caixin learned, a move that could help the company hedge against sluggish consumer spending in its home market.

The Temu platform is reaching out to prospective merchants of wares including apparel, jewelry and consumer electronics, especially those who have cross-border e-commerce experience, according to a company document seen by Caixin.

Sany profit falls 73.85% as demand for construction gear dries up