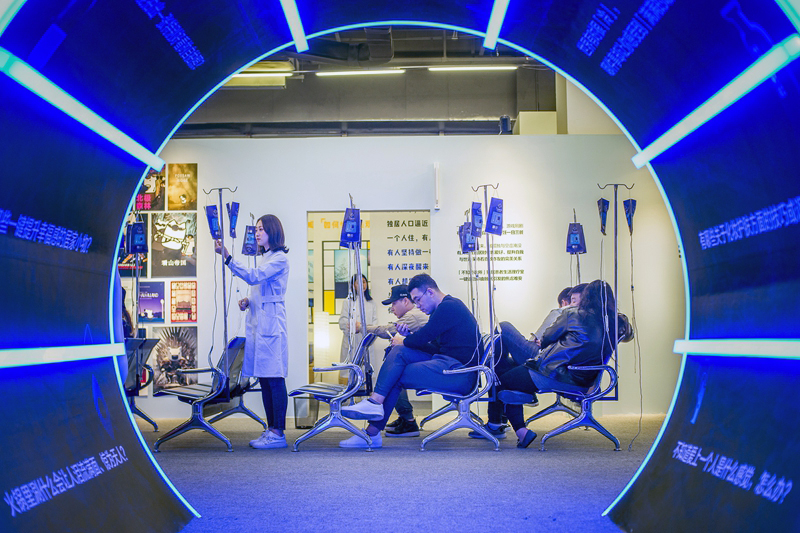 China’s technology companies have been feeling the chill as winter falls — and the freeze may last longer than usual.

Bad news has piled up since the second half of 2018 as tech companies are rattled by dwindling capital, volatile markets and tightening regulations. E-commerce giant JD.com reported its slowest quarterly revenue growth since 2014 and first-ever decline in new users in the third quarter. Larger rival Alibaba Group was better off but lowered its full-year guidance.

Car-hailing behemoth Didi Chuxing saw its valuation nearly halved in the private equity market after business was hit by murder scandals involving drivers and tighter regulatory oversight. Ofo, the bike-sharing startup that was once an investors’ darling, has suffered a capital crunch that led to its founder Dai Wei being put on a government blacklist for debt default.

A number of rising tech startups, including video site iQiyi and online service provider Meituan-Dianping, have rushed for public listings in New York and Hong Kong, only to experience disappointment. More than 70% of the companies that issued stock last year in Hong Kong have seen the shares fall below the initial public offering (IPO) prices, while two-thirds of those listed in the U.S. shared the same fate.

Toward year end, news emerged of massive job cuts across the industry, although most companies declared they were only making normal business adjustments.

“Reorganizations will always let people go,” said a tech sector headhunter, who forecast more job cuts in the industry in the first half this year.

“The major reason is the poor outlook,” said a human resources executive at a mid-size internet company. “(Companies) need to tighten the purse strings in preparation for the hard times.”

While some analysts and consultants project slowing growth this year for the tech industry worldwide because of economic uncertainties, China’s previously white-hot tech sector faces its own peculiar challenges.

Weighing especially on the China tech outlook is the broader cooling of the world’s second-largest economy and China’s damaging trade war with the U.S. China’s GDP grew 6.5% year on year in the third quarter, the slowest quarter of growth since 2009. Analysts have widely forecast that this year’s growth would further slow to less than 6.5%.

The economic slowdown, along with China’s graying population, makes it harder for internet companies to maintain their main revenue growth from advertising while finding new users, analysts said. Moreover, raising capital is becoming increasingly challenging for startups as investors are more hesitant to pour their money into the cash-burning sector.

“The year 2019 may be the worst year in the past 10 years, but it is likely to be the best year in the next 10 years,” said Wang Xing, founder of Meituan in mid-December, as the company cut about 0.5% of its headcount of more than 51,000 in a “normal operational restructuring.”

The first domino fell in the peer-to-peer (P2P) online lending sector, which enjoyed years of rocketing growth as the bellwether of the internet finance boom but later became the target of a government crackdown on financial risks. Dozens of Chinese online P2P lending platforms fell into financial or legal troubles around the middle of 2018 because of tightened regulation and liquidity.

An industry source attributed the bust of the P2P sector to reckless expansion and competition regardless of the price, which pushed up business costs that the sites were unable to cover through regular investment practices.

“The business should have been a competition of investment ability and project management, but it turned out to be a race for customer numbers and asset size,” said a P2P executive.

Amid brutal competition and tightened oversight, more than 80% of China's 6,200 P2P platforms have either closed or encountered serious difficulties over the past two years, according to Shanghai-based research organization Yingcan Group. The number of survivors is expected to continue falling to fewer than 300 by the end of this year as regulators maintain a tight grip on the industry, Yingcan said.

Online education providers, which offer distance learning and one-on-one tutoring, followed P2P firms with a wave of closures and layoffs due to shrinking capital. An industry source said the cost for an online education site to obtain a new user has surged to as high as 10,000 yuan ($1,476). The annual disposable income of an urban resident was only 36,000 yuan in 2017 and 13,000 yuan in rural areas.

In the online gaming sector, a ten-month suspension of new game approvals during a government overhaul put the brakes on game developers’ rapid growth. Although approvals resumed in December, the biggest players, including Tencent and Netease, have yet to win the green light for releasing new titles.

The deeper concern on the future of tech companies stems from China’s changing demographic landscape, which will put an end to the ever-growing population that has benefited internet companies’ expansion. Hu Wenqin, a partner of TH Capital, said China’s population had the lowest net growth — between 4 million and 6 million in 2018 — since 2000.

Meanwhile, ongoing taxation and social security reforms are expected to further push up labor costs by requiring higher employer contribution for staff social insurance. Labor is the biggest part of business costs for most of China’s tech firms, analysts said.

Internet companies have also found it difficult to maintain their biggest revenue source from advertisers amid the broader economic slowdown. Wang Gaofei, CEO of China’s most popular social media platform Weibo, attributed the company’s slower revenue growth in the third quarter to declining advertising sales. Search engine Baidu Inc. said its third-quarter growth in revenue and users both slowed, while Alibaba lowered its full-year revenue guidance by 4% to 6%, citing the cooling economy.

Deep-pocket investors that fueled China’s tech boom in recent years have turned more hesitant in the face of the recent market cooling. A capital market source said the average period for tech companies to complete a funding round stretched to more than six months in late 2018 from the previous average of three months. Many companies have to cut their valuations to secure new capital.

China’s tech industry has experienced ups and downs over the past two decades. The last time the industry was worried about a downturn was in 2015, when the overheated online-to-offline (O2O) service sector hit a capital crunch after the stock market turmoil that summer.

But many people say they think the current market slowdown is more complicated.

“The 2015 downturn was a market adjustment after the irrational capital frenzy fueled an overheated market,” said Ai Yu, managing partner of China Everbright Ltd. “The market was crazy at that time, and any project could get investors, and everyone in the market believed they could get rich.”

Even after the 2015 market downturn, investors with ample cash were still keen to find new targets. In the following years, billions of dollars were poured into the emerging bike-sharing sector, fueling a new round of business boom and cash-burning price wars.

But the investment spree turned out to be another painful lesson. Ofo, one of the biggest players in the bike-sharing market, has been suffering a capital crunch since late last year with billions of yuan of unpaid debts. Its archrival Mobike reported a gross loss of more than 100 million yuan every month.

Investors have found difficulties cashing out their investments through IPOs as mainland regulators tighten controls on public listings. Meanwhile, companies that rushed to list overseas have suffered across-the-board declines.

Equity transfer at the primary market, a major means for early investors to exit, also slowed in 2018, according to accounting firm PricewaterhouseCoopers.

Compared with 2015, investors are short of capital after years of national deleveraging made it more difficult to raise money, analysts said.

Data from Zero2IPO showed that in the first 11 months of 2018, China’s yuan-dominated private equity funds raised 1.15 trillion yuan, down 28.7% from a year earlier. At the same time, the funds placed 1.03 trillion yuan of investments, 6.6% less than in the previous year.

As Beijing eases credit to bolster the economy, some said they expected a revival of tech sector investment amid rising liquidity. But others argued that it is time for the sector to cool down and let asset values return to a rational level.

“It is a difficult but necessary adjustment to the market,” said a Hong Kong private equity source.

Nevertheless, Chinese tech companies must prepare for a different future as factors that have driven their growth for decades are changing. The impact of Sino-American frictions on trade, investment and exchange of talent, as well as China’s graying population, will be major challenges for tech companies, said Zhang Yang, chairman of Beijing Tsinghua Holdings Capital Co. Ltd.

This is the first of a series of reports on China’s tech industry coming over the next several days from Caixin.