By Du Caicai and Han Wei 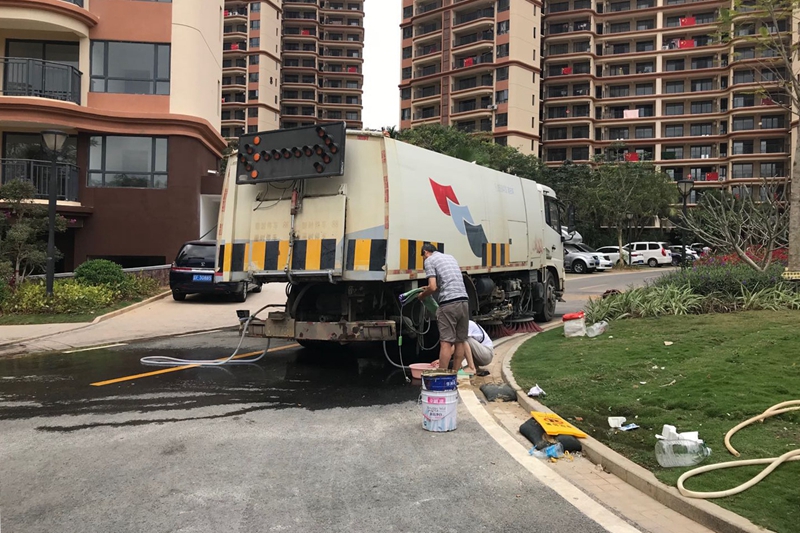 A resident of the Guomao community gets water from a tanker truck after the supply was cut. Photo: Caixin

The warm beaches and crystal-clear waters of China’s southernmost island of Hainan have lured millions of Chinese from the north to escape the winter’s cold each year. As in other parts of the world, this has fueled massive housing projects targeting snowbirds and retirees.

But for hundreds of homebuyers in Hainan, the tropical paradise turned into a demolition zone last February as the year of the pig dawned. On short notice, crews moved in Feb. 1 and hurriedly evacuated residents of one building without their belongings before tearing it down. An elderly resident had a heart attack in the chaos, one resident told Caixin.

Although demolition was halted in response to resistance from outraged homeowners, the remaining orange-painted structures of the Meiya development 20 kilometers from the center of Wanning city are marked with big demolition warning signs. Power and water have been cut off by local authorities. Long banners hang down the sides of the nine-story buildings reading, “Live or die with the community” and “Return our water, electricity and life.”

The project’s 500 property owners have found that their new homes are in the crosshairs of the local government after a major shift in policies. So are hundreds of people who bought 202 villas and apartments in 11 buildings in the Guomao Qingshuiwan community in the neighboring county of Lingshui, where residents similarly objected to demolition orders and succeeded in halting the work.

As a nationwide campaign to cool the property market unfolded and Hainan province shifted policies to reduce reliance on the property industry, Meiya, Guomao and other similar projects lost government support and became the targets of crackdowns. Over the past three decades, the island province has been the scene of repeated boom-and-bust real estate cycles that local authorities are trying to curb.

According to the Wanning government, the Meiya community is illegal and lacks the necessary permits for property development ranging from land purchase to construction and sales. The project was developed by privately owned Meiya Air Real Estate Investment Co.

Cutting the water and power supplies, the local government demanded that residents move out and the project be destroyed. Although officials pledged that homeowners who registered their purchases would get their money back from developers, few have been willing to move out for fear there will be a long battle to recover their investments.

Homebuyers are outraged, challenging why they should pay the costs for dodgy business practices by developers and a change of policies by local officials.

“We put all of our savings in the home, and now they want to tear it down,” said one Meiya resident with northeast accent. The woman is one of hundreds of homeowners in Meiya who came from northern provinces seeking a winter home in Hainan. Many of them are retirees.

Most of Meiya’s residents moved into their new homes around the Lunar New Year holiday shortly after construction was completed. In the weeks following the standoff over demolition, the Wanning city government issued statements explaining the project’s violations.

While local authorities say residents should try to get their money back from the developers, some residents argue that the city government should also take responsibility for the situation. As of March 8, only 26 homebuyers followed the government’s order to register their purchases for compensation, Caixin learned.

In Lingshui’s Guomao community, homeowners have also been resisting government demolition since January. Hundreds of people remained in the residential complex without water and electricity.

“I can’t understand how could a project that was advertised all over the city become illegal,” said one Guomao homeowner.

Boarding without a ticket

The Meiya and Guomao developments were star investment projects that were heavily promoted by local governments several years ago, Caixin learned.

One person calling himself Li Xing told Caixin that the Meiya residential project was part of a reward granted by the Wanning government to Meiya Air Holding Co., a private seaplane operator, for a 5.5 billion yuan investment in an aviation project in the city in 2013.

In 2015, Meiya Air Real Estate won the city government’s approval for the residential project. However, the issuance of all necessary licenses, including those required for land purchase, project planning, construction and sales, was since delayed.

According to Li, as part of the provincial government’s initiative to accelerate investment in early 2015, Wanning authorities pushed for construction of major projects including Meiya Air’s aviation and residential projects. In public speeches, city officials encouraged investors, including property developers, to “board the train first and buy tickets later,” referring to starting construction before obtaining licenses, according to Li.

It was not rare for developers in Hainan to kick off construction before getting all licenses, Li said.

Some homebuyers know of the unwritten rules and are attracted by the lower prices often offered for unlicensed projects, sources said. A Hainan real estate broker said about 85% of projects on the city’s markets lack certain licenses.

“People don’t think about it too much,” said one Meiya homeowner, who said he bought property in another project in Wanning and obtained his ownership certificate several years later.

The Wanning government’s tolerance for developers started to change in early 2016 in response to a provincial government policy to suspend approval of new residential projects. Hainan’s policy came amid a nationwide campaign initiated by the central government in 2016 to rein in soaring housing prices and market speculation. A number of provinces and cities have since installed restrictive housing market policies.

A Wanning land and resources bureau official said the crackdown on the Meiya project was also part of the provincial government’s effort to protect the local environment by eliminating excessive construction. The official said authorities are investigating why Meiya Air Real Estate could defy government orders.

The island province, set up in 1988 as one of China’s largest special economic zones, has experienced waves of housing market bubbles. In 1993, a central government policy to curb housing speculation forced 95% of Hainan’s property development firms into bankruptcy, and the provincial economy took seven years to recover.

The last round of housing-market boom in Hainan started in late 2009 when the State Council, the cabinet, issued a plan to expand the province’s tourism industry.

Despite rules issued by the provincial government to prevent market bubbles, Hainan’s average housing price surged to 13,000 yuan per square meter in 2011 from 8,735 yuan in 2010.

The price rise didn’t last long, and Hainan’s housing values started to plunge in late 2011 until a recovery in 2013, according to Li. Since 2015, the market revival accelerated, and many projects were launched, including the Meiya and Guomao communities, Li said.

But since 2016, the Hainan government has again tightened controls on the housing market. In April, the provincial government introduced restrictive home purchase rules in response to a central government policy to make Hainan a special trade zone and prevent excessive development.

The policies reflect efforts to reduce Hainan’s reliance on real estate, the Wanning land and resources official said. In 2018, Hainan’s property investment dropped 16.5% from the previous year while sales of new residences plunged 23% in terms of value.

At a March forum organized by Caixin, Sun Dahai, deputy secretary-general of the Hainan Provincial Party Committee, said the province has great determination to control its housing market and change the fact that “more than half of Hainan’s fiscal revenue has relied on the real estate industry.”

“The environment has changed completely,” said a Hainan developer, adding that the government aims to break Hainan’s curse of repeated housing market bubbles.

“Projects like Meiya that want to take advantage of loose policies to board the train without a ticket will no longer exist,” the developer said. “I hope those homebuyers in Wanning are the last victims” of the market craze, he said.