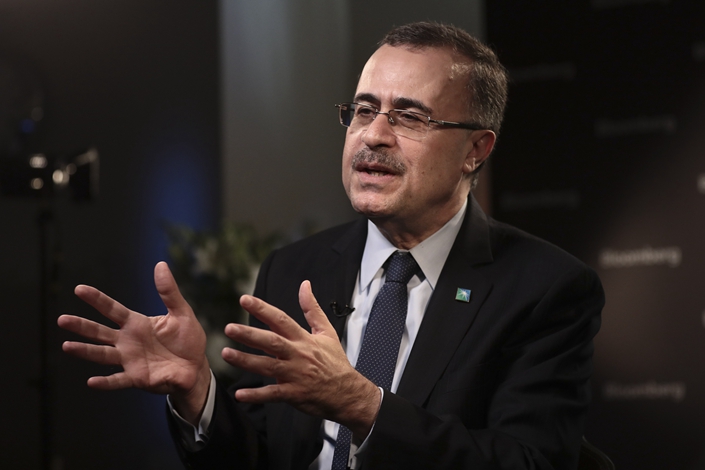 A flurry of state visits has helped Saudi Arabia nudge ahead in its long-running tussle with Russia to be China’s main supplier of crude oil this year. Yet the kingdom has larger ambitions. It looks to take advantage of China’s push to develop its petrochemical sector by diving into downstream petrochemicals production.

The driver of this expansion is state-owned Saudi Arabian Oil Co. (Saudi Aramco), the world’s largest oil and gas company, thanks to its exclusive access to and operation of the country’s vast crude oil reserves. Its pretax profits dwarfed those of its largest privately owned peer, Exxon Mobil Corp., more than fivefold last year.

Amin H. Nasser, the company’s president and CEO, told Caixin that the oil behemoth is planning to float around 5% of its stock in a 2021 initial public offering, with analysts expecting it to raise around $100 billion. If correct, that would give Saudi Aramco a $2 trillion market capitalization, almost two and a half times that of Apple Inc.

Both Saudi Arabia and Russia have long vied to export the lion’s share of China’s seemingly endless thirst for oil, with Russia claiming pole position since 2015, largely thanks to it being quicker to take advantage of the relaxation on imports for China’s small, independent “teapot” petrochemical refiners, so named for their ramshackle appearance.

Yet Saudi Arabia’s charm offensive so far this year, including a state visit from Crown Prince Mohammed bin Salman in February, has helped it reclaim the lead in the first quarter. China’s Saudi crude imports in March reached 7.32 million tons, giving the nation an 18.6% market share, while Russia’s share fell to 13.6%.

Due to environmental and safety concerns, the Chinese government is also cutting the number of smaller petrochemical refiners — which have been a major source of demand for Russian oil — while encouraging larger, more advanced facilities to develop.

At the same time, Saudi Aramco has sought opportunities to become involved in these larger projects as part of its bid to diversify away from its reliance on crude oil exports, where profits are susceptible to shifts in global prices. In 2015 Aramco’s then-CEO Khalid Al-Falih told Caixin, “I hope to see Saudi Aramco’s name in every province of China.” A year later, the kingdom launched its Vision 2030 economic diversification plan, strengthening the company’s resolve to increase its China presence.

Aramco took a big stride in this regard in February when it signed a deal to develop a petrochemical refinery complex in the city of Panjin in Northeast China’s Liaoning province, which is expected to cost over $10 billion. The plant will create demand for 300,000 barrels of crude oil per day, which will then be processed into ethylene, used in various plastics, and other chemicals. Aramco holds a 35% stake in the venture, while the military-related China Ordnance Industries Group Corp. Ltd. (Norinco) holds 36%, with a local state-owned enterprise holding the remaining 29%.

“(The) Liaoning Panjin Petrochemical Refining and Chemical Project is very important to us,” Nasser told Caixin. “Our agreement with Norinco and Liaoning province is a clear demonstration of Saudi Aramco’s strategy to move beyond a buyer-seller relationship to one where we can make significant investments to contribute to China’s economic growth and development,” he added.

In addition, Saudi Aramco also plans to engage in the local retail oil products business, with initial plans for 130 gas stations in Liaoning. In the future, this business will be extended to neighboring provinces.

The Panjin deal came a few months after Aramco announced that it would take a 9% stake in Zhejiang Petrochemical Co. Ltd., a private company in East China’s Zhejiang province that will soon finish construction on a petrochemicals plant designed to process 20 million tons of crude a year in its first phase. The deal also ensures that Aramco will be the projects’ main crude supplier. Aramco also signed a long-term deal to supply Hengli Petrochemical Co. Ltd. with 20 million tons of crude oil a year in June 2018.

These deals have cemented Aramco’s place in China’s burgeoning petrochemicals market at a crucial time, when foreign companies such as Germany’s BASF SE are scrambling to become involved in the sector. “Saudi Aramco is adjusting its development strategy, with the company hoping the relationship with China will not just be about business, but also promote China’s economic growth through investment,” Nasser said. The company will continue to look for ways to expand its footprint in the country, he added.