China Rare-Earth Shares Jump on Fears of Ban on Exports to U.S.

By Li Liuqian and David Kirton 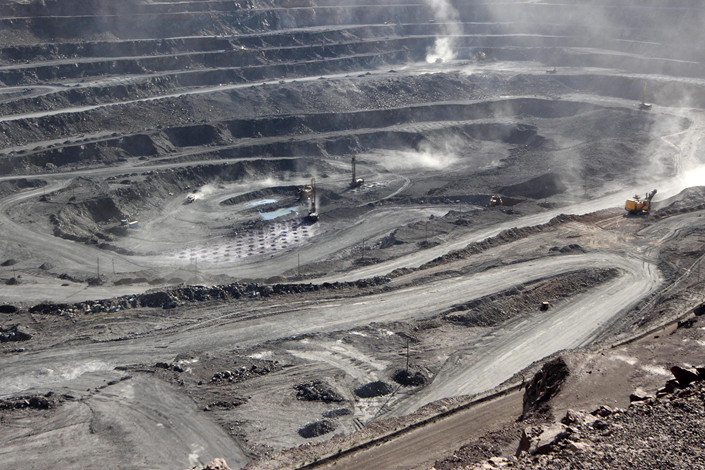 A rare-earths mine in China’s northern region of Inner Mongolia in July 2011. Photo: VCG

* Last year, the U.S. relied on Chinese exports for 80% of its supply of the elements, which are crucial materials in the manufacturing of many electronic products

* While the U.S. is relatively rich in rare-earth reserves, it lacks the smelting technology to extract them, an analyst noted

(Beijing) — Stocks of rare-earth producers have been volatile amid speculation that China might restrict exports of its abundant supplies of the elements to the U.S. in response to ongoing trade tensions, with shares in 30 companies rising 5.6% during Wednesday trading alone.

Fluctuations have become the norm for the 30 Chinese producers that make up the rare-earth index, with stocks up by 30% on average since May 7, according to Chinese data provider East Money. The rise suggests that the prospect of producers being cut off from major buyers is not worrying the market.

China is the world’s biggest producer of rare earths, which are elements usually found in ores that can be smelted and processed into alloys, fluorescent materials or other materials often used in the batteries of electric vehicles and robotics components. China leads the world in rare earth extraction and smelting, and is home to 36.7% of the world’s rare earth reserves, according to a recent report by Founder Securities Co. Ltd.

On the other hand, the U.S. was reliant on Chinese exports for 80% of its supply last year, according to a February report from the U.S. Geological Survey. Many analysts have suggested that China might use this dependency as a bargaining chip in ongoing trade tensions and could restrict exports in retaliation against increased tariffs and Washington’s action against Chinese telecommunications giant Huawei.

A visit by inspectors from the Ministry of Industry and Information Technology to rare-earth production sites in the eastern province of Jiangsu fueled suspicions that China wanted to remind the U.S. of its dominance in this area, as did President Xi Jinping’s well-publicized visit to a rare-earth production enterprise in neighboring Jiangxi province on May 20.

Even more direct signals came this week when officials at state planner the National Development and Reform Commission said that, “while meeting domestic demand is a priority, China is willing to try its best to satisfy global demand for rare earths as long as they are used for legitimate purposes,” according to comments reported in state news outlet Xinhua. On Thursday, Ministry of Commerce spokesman Gao Feng said that it would be “hard to accept” any country using Chinese rare earths to manufacture products aimed at “suppressing China’s development.”

The U.S. was 100% reliant on imports for its rare-earth supply last year, importing $160 million of the elements, according to the U.S. Geological Survey. Rare earths are also vital for the U.S. defense industry, which uses them in products such as jet engine coatings, missile guidance systems and in radar. This explains why the U.S. has not included rare earths in tariffs on Chinese goods.

China Merchants Securities Co. Ltd. recently reported that while the U.S. is relatively rich in rare-earth reserves, it currently lacks the smelting technology to extract them. On the other hand, China largely has a monopoly on the world’s most advanced rare-earth smelting technology and is home to most of the world’s smelting plants, and it would take a substantial amount of time for the U.S. to develop its own capabilities, according to Founders Securities.