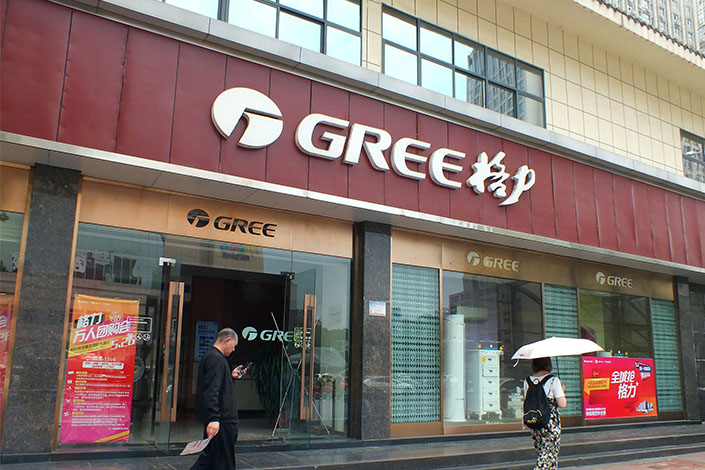 A Gree store in Central China’s Hubei province on May 17. Photo: VCG

The claim comes as Gree is working to pivot from offline sales, which have suffered recently, to online retail — a space in which Aux has seen rapid growth.

Gree said one of the eight models, which is labeled as having an energy efficiency ratio of 3.59, was found to have a ratio of only 2.68.

Gree said that the production and sale of these products “severely infringed consumers’ legal rights and interests” and it had reported Aux to the State Administration for Market Regulation.

The post, which had been shared over 10,000 times on Weibo at the time of publication, was released a week ahead of the June 18 online retail festival known as “618,” which is akin to Black Friday in the U.S. On that day, prices on most of China’s major e-commerce platforms are slashed and sales revenue spikes.

Aux accused (link in Chinese) Gree of trying to damage its reputation ahead of the 618 festival and said it will sue its larger competitor.

The State Administration for Market Regulation said Monday that it has ordered local market regulators investigate into Aux's products.

Market regulators for East China’s Zhejiang province and the region’s city of Ningbo, where Aux's headquarters are located, said Tuesday they are investigating the incident, The Paper reported.

The inspections of Aux’s products were carried out by the Sichuan Institute of Electron Production Supervision & Inspection. The national authority that regulates product certification suspended the institute’s ability to inspect kitchen hoods for several months in 2017 (link in Chinese), citing a lack of properly trained staff (link in Chinese) and missing test equipment.

Established in 1989, Guangdong province-based Gree dominates China’s domestic air-conditioner market with a 36% market share in the first quarter this year, ahead of major rivals such as Haier Electronics Group and Medea Group, according to industry tacker All View Cloud. Aux has a market share of just 3.2%.

Gree has long relied on its physical stores. However, as offline sales slump, the company is looking to tap the burgeoning online market.

According to data on the sector from industry tracker All View Cloud, revenue generated by home air-conditioner sales nationwide rose 2.8% year-on-year in the first quarter, with online revenue growing 30.9% and offline dropping 6.4%.

Gree announced in March that it had teamed up with Alibaba Group Holding Ltd.’s Tmall platform to expand its online offerings, including a new unit which will work on voice-controlled products.

However, competition to cool China’s homes has been heating up online. An industry analyst said Aux has been seeing rapid growth in internet sales through a low-price strategy, threatening Gree.

Gree’s online air-conditioner sales revenue dropped 11.6% year-on-year in the first quarter this year, while Aux saw 56% growth, according to All View Cloud.