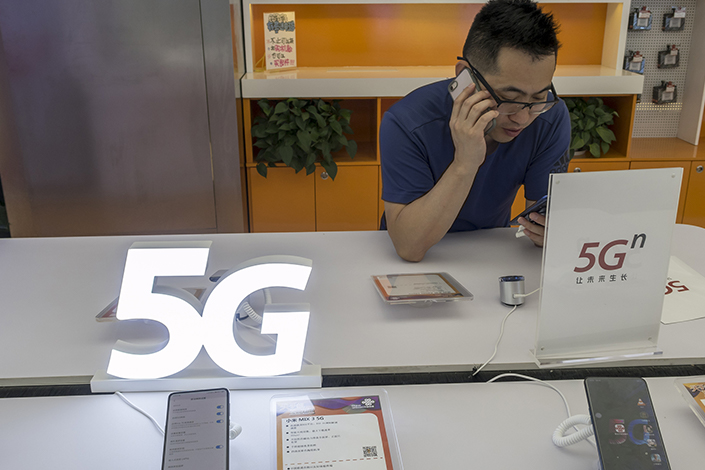 Leading wireless carrier China Mobile said it has placed its first orders for test-use 5G handsets and other end-devices for the new technology since winning a commercial 5G license a week ago.

The relatively modest order for 10,100 5G phones comes as China adds urgency to its drive to build up super-high-speed wireless networks that will power a wide range of data-intensive applications in the future, such as autonomous driving and telemedicine. A small number of countries, including the U.S. and South Korea, have already launched limited commercial 5G services. But service on a similar scale in China isn’t expected until next year.

The batch of orders from China Mobile went to domestic manufacturers that now account for more than half of the world’s smartphone sales. They include 5,000 smartphones from domestic leader Huawei; 2,000 each from Xiaomi and ZTE; 1,000 from Oppo; and 100 from Vivo. China Mobile said it would also buy 5,000 Huawei CPE Pros and 2,000 of ZTE’s CPEs, devices that convert 5G signals into Wi-Fi signals.

No prices were given for the phones, many of which are the first such 5G models as manufacturers gear up to make products for networks that are just starting to come on stream. Most of the models are likely to end up being used in the laboratory or as display models rather than as actual phones for real-world use, Strategy Analytics analyst Yang Guang told Caixin.

China Mobile’s purchase announcement comes less than a week after the telecom regulator issued commercial 5G licenses. China had typically issued such licenses later than developed markets for previous generations of wireless standards, preferring to wait until the technology matured before starting to build networks costing tens of billions of dollars.

But the country has taken a more aggressive stance for 5G, playing a more active role in the creation of the standards that will be incorporated into future generations of phones and network equipment for years to come. Part of that is because many of the industry’s key manufacturers are Chinese, including leading network-equipment makers Huawei and ZTE, and smartphone giants like Huawei, Oppo and Xiaomi. Most of those are working to develop 5G-based technologies that can be patented and incorporated into their own products and licensed to others.

China’s three major wireless carriers have begun building trial 5G networks, and China Mobile’s phone order marks part of that process. Most industry-watchers had been expecting China to issue commercial licenses by the end of this year, but few expected such licenses to come as soon as they did with last week’s surprise announcement.