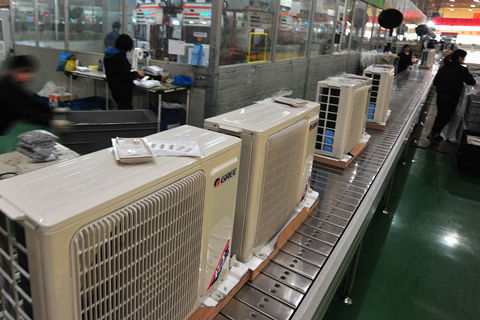 Chinese air conditioner giant Gree Electric Appliances Inc. is pushing ahead with its ambition to develop its own microchips for supply-chain self-sufficiency despite market doubts over feasibility.

The previous day, Gree moved a step closer to gaining indirect access to Dutch semiconductor manufacturer Nexperia. Shanghai-listed smartphone contractor Wingtech Technology Co. Ltd. said in a Tuesday filing that it received regulatory approval to sell new shares to fund its $3.6 billion acquisition of Nexperia. Gree will invest 3 billion yuan in the share purchase for a 10.98% stake in Wingtech, according to the filing.

Gree unveiled its chip-making ambition in May 2018 when Chairwoman Dong Mingzhu said the company would invest 50 billion yuan ($7.3 billion) over three years to develop chips. Dong in June 2018 said Gree aimed to supply all of its air conditioners with self-developed chips by the end of 2019.

In August, Gree set up a wholly owned chip design venture, Zhuhai Lingbianjie, with 1 billion yuan of registered capital. According to Gree’s 2018 financial report, Lingbianjie had 49.9 million yuan in net assets by the end of the year with an annual net loss of 74,200 yuan.

Huang said at the Wednesday meeting that Gree is focusing on chip design rather than manufacturing. The company didn’t disclose the manufacturer of its chips.

Gree is aiming to achieve self-sufficiency in microchips, which cost 4 billion yuan a year to buy, Wang Jingdong, a vice president of Gree, said in a previous interview with Caixin. The move also reflected Gree’s concerns over its reliance on imported chips after the U.S. business ban on ZTE Corp. last year, according to Wang.

A Gree employee told Caixin that the company set up a team to do research on chips for air conditioners as early as 2015. Gree is hoping Lingbianjie’s business can expand beyond self-supply, said the person, who declined to be named.

But some market experts have expressed doubts about Gree’s chip push, citing its inexperience and the sky-high costs. That includes Zhu Hongjiang, former chairman of Gree, who once said he is not confident in Gree’s chip-making business as it requires long-term accumulation of experience.