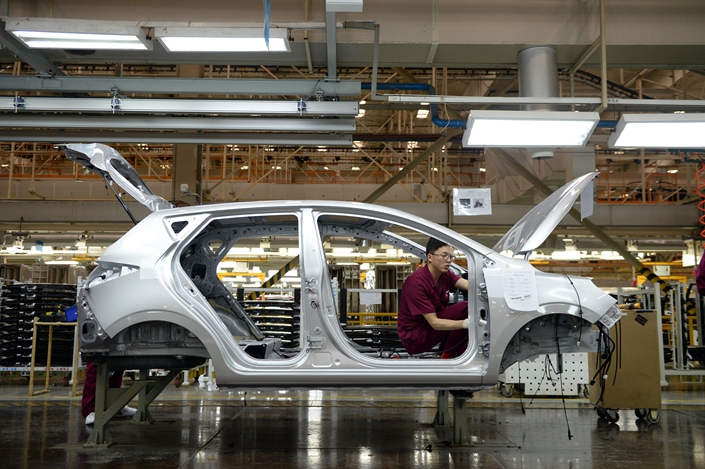 A worker mans a production line on May 8 at a JAC factory in Hefei, East China’s Anhui province. Photo: IC Photo

Chinese automaker Anhui Jianghuai Automobile Group Corp. (JAC) has been fined 170 million yuan ($25 million) after an investigation found that three of its models had been designed to cheat emissions tests.

The Shanghai-listed automaker said on Friday (link in Chinese) that it received the penalty notice from the Beijing Municipal Ecological Environment Bureau.

According to the notice, the focus of the investigation was the three vehicles’ onboard diagnostic (OBD) systems. The environment bureau said JAC deliberately used substandard OBD systems that allowed the models to illegally evade the capital city’s vehicle emission rules. The authorities ordered the company to suspend sales of the three models. The notice did not say which models are involved, but did specify that they are commercial vehicles.

The penalty notice was issued around one year after the Beijing environment bureau launched a wide-ranging investigation into the auto industry as it sought to implement a set of stricter automobile emission standards.

Responding to the penalty, JAC said it sold just 675 units of the three substandard models — all to customers in Beijing — and hasn’t sold any since September 2018.

Founded in the 1960s, the Anhui province-based JAC made its name by making and selling chassis, but has since expanded into car manufacturing, including passenger and commercial vehicles.

Carmakers in China have slipped into the slow lane since last year, as annual sales declined for the first time in about 30 years, with JAC no exception. The automaker posted a net loss of 786 million yuan last year with sales dropping 10% to 462,400 units.

The 170 million yuan fine will be included in JAC’s 2019 financial report, putting further pressure on its balance sheet for the year.

JAC is not the first Chinese automaker to be fined over emission violations. In a similar case in 2016, Chongqing-based Chang’an Automobile (Group) Co. Ltd. was fined 3.78 million yuan after some of its vehicles were found to be pumping out excess pollution.