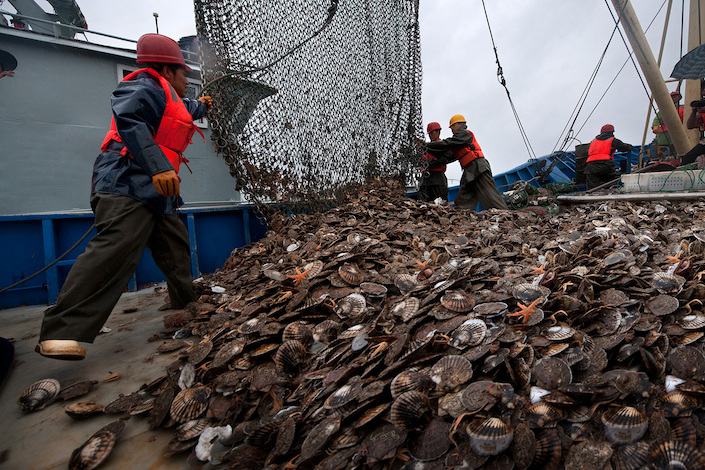 A Chinese seafood company that has been under the spotlight for repeatedly reporting volatile financials because of missing scallops was accused by regulators of fraud and misrepresentation.

Shenzhen-listed Zhangzidao Group Co. Ltd. was fined 600,000 yuan ($87,233) by the China Securities Regulatory Commission after a 17-month investigation concluded with findings of financial fraud and disclosure violations. Several company executives were banned from the stock market.

Dalian-based Zhangzidao has been at the center of controversies since 2014 as it has repeatedly reported dramatic changes in financials citing unexpected losses of mollusks due to natural factors.

In 2014, the company said a huge number of scallops in its farm fled because of cold currents, reversing its half-year gains of 48.5 million yuan to a net loss of 812 million yuan by the end of the third quarter. In 2018, the company again reported huge losses as scallops starved to death because of rising temperatures.

The dramatic reports triggered an investigation of the company in February 2018, which led to the finding that the company fraudulently reported its financials and violated information disclosure rules. Zhangzidao inflated its 2016 profit by 131 million yuan and deflated 2017 gains by 279 million yuan, according to the regulator.

Twenty-four company executives were also fined for misconduct. Chairman Wu Hougang was banned from the stock market for life while three other senior managers were banned from five to 10 years, the company said Wednesday in a statement.

Caixin learned that inflated net profit in 2016 helped Zhangzidao avoid the risk of delisting after it reported consecutive net losses since 2014.

But Zhangzidao asserted Thursday that there was a misunderstanding by investigators regarding its business and said it will appeal the decision to seek lighter punishment.

Established in 1958, Zhangzidao is majority owned by the Zhangzidao county government in Dalian. The company reported a 40 million yuan net loss in the first quarter of 2019 and projected a first-half loss of as much as 25 million yuan, again citing natural disasters causing declines in scallop production.