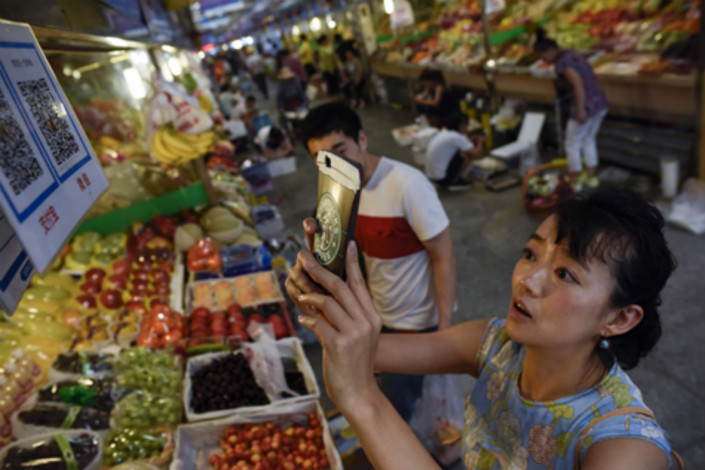 In the future, we will face real challenges when working with foreign payment agencies, Li Yang, chairman of the National Institution for Finance and Development, said Friday at a seminar in Beijing. Photo: VCG

Facebook’s proposed digital currency, Libra, may have the largest impact on China in the area of transactions payments — such as paying bills or buying goods and services — where Chinese companies already have well-established mobile payments systems and where Chinese regulators have less oversight power at the moment, Li Yang, chairman of the National Institution for Finance and Development, said Friday at a seminar in Beijing.

Li, who is also a member of the Chinese Academy of Social Sciences, the state-backed research institute, said that Facebook has many problems to solve before it can become a transaction medium. “Libra still has a long way to go to become a currency,” he said.

But just as Chinese internet-based third-party payment companies emerged in recent years, Libra’s first major impact would likely be in the area of transaction payments, Li said. “In the past, China built an online wall (against foreign influences on domestic payments), and with this protection we’ve made great progress. In the future, we will face real challenges when working with foreign payment agencies,” he said.

Libra could potentially be used by all Facebook’s 2.7 billion users worldwide, with the significant advantage of being able to offer cross-border payments in a single currency over a widely used internet-based social networking platform, Li said. This could pose a serious threat to China’s existing mobile payments systems, such as Alibaba’s Alipay and Tencent’s WeChat Pay.

“China’s mobile payment industry must maintain a sense of urgency. Under the new globalized (payment) situation, we are facing new tasks and challenges,” he said.

Libra could operate in two ways, he said. The first would be similar to the International Monetary Fund’s Special Drawing Rights, which are backed by a weighted basket of major currencies. The other would be to invest the funds it raised in a series of assets with high liquidity, similar to the foreign exchange reserves in which central banks invest to back their currencies, operating like a money market fund, Li said. Which mechanism it should adopt is “what Libra currently needs to explore,” he said.

At the moment, Facebook plans to make Libra a stable currency by tying it to a basket of major currencies with low volatility, according to a white paper Facebook released last month.

National currencies represent a portion of a country’s sovereignty, so large countries will not easily give up control over their money to a corporately owned trans-national digital currency like Libra, said Li.

Li isn’t the only expert who’s concerned about the digital currency’s impact on the payment industry. Wang Xin, director of the People’s Bank of China’s (PBOC) Research Bureau, said Monday at another seminar in Beijing that Libra’s cross-border payments feature could have a significant effect on monetary policy, financial stability and even the international monetary system, requiring central bank oversight.